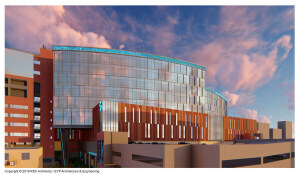 Registered nurse Nicholas Pagano, 31, attacked the unidentified woman in the early morning of February 7 in the hospital break room. Investigators say Pagano, who was a travel nurse assigned to the hospital, doused the victim with an ignitable fluid, set her on fire and proceeded to beat her with a wrench, according to NJ Advance Media.

The woman suffered third-degree burns to her face and other parts of her body. She is being treated in a specialized burn hospital. Pagano was later found dead from an apparently self-inflicted gunshot wound.

A witness saw Pagano enter the room around 5:15 a.m. before hearing the woman scream, but did not see the actual attack. “[The witness] then observed the victim running in the hallway, with Pagano chasing her [and] striking her with what appeared to be a wrench,” said an affidavit. Police later recovered a wrench at the scene.

Surveillance footage showed Pagano leaving the hospital at 5:29 a.m. He was not scheduled to work that day at the hospital. Police sought him out Monday night on charges of attempted murder, aggravated arson, aggravated assault and weapons possession before finding him dead in his jeep Tuesday morning in Waterford.

The victim suffered third-degree burns over her upper body, face and hands and had a cut to her head that required stitches. She was treated in the Hackensack emergency room before being moved to Cooperman Barnabas Medical Center in Livingston. Her exact condition has not been revealed.

The woman is married and has a son and a daughter. A colleague, Nita Ibrahim, has set up a GoFundMe page for her and her family that has raised over $20,000 as of February 14. “Her colleagues are devastated and heartbroken over the events that took place. She always expressed how she’s working for her kids,” wrote Ibrahim on the page. “She always came to work with a smile on her face and was always willing to help whenever possible.”

A motive for the attack has not been established. Pagano underwent a full screening prior to starting at the medical center in mid-November, said hospital spokesperson Ben Goldstein. The facility increased security following the incident on Monday. “Our thoughts and prayers are with her and her family," said Goldstein. "Hackensack Meridian Health strongly condemns any act of violence.”

A woman who identified herself as Pagano’s relative said Wednesday that the family was not speaking to reporters about the incident.

A nursing assistant shot and killed a coworker back in early October at Thomas Jefferson Hospital in Philadelphia. The man, Stacey Hayes, 55, walked up behind Anrae James, 43, and shot him with an AR-15 assault rifle before fleeing.

He was later found by and engaged in a shootout with police that injured him and two officers. Despite being in critical condition, he survived and was charged with attempted murder. His case was put on hold, however, after a court appointed psychiatrist deemed him incompetent to stand trial, according to local affiliate, ABC6 News. He is currently undergoing mental health treatment.