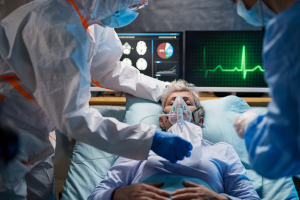 Researchers at the University of California, Berkeley and Kaiser Permanente report that more than 40% of patients were admitted to the ICU and that hospital stays on average were 10.7 days for survivors and 13.7 days for non-survivors. These figures are higher than those reported in data out of China — which has been used in many studies to determine the full impact of the virus — suggesting that the U.S. has been hit harder than initially believed and that findings from other countries may not be sufficient to rely on when anticipating U.S. healthcare demand.

"A major challenge in COVID studies is the pace at which things are changing," Dr. Vincent Liu, research scientist with Kaiser Permanente Division of Research, told HCB News. "This means that we should expect to see early estimates continue to change as we care for more patients and have longer follow-up periods. While there is an urgency to produce scientific results as quickly as we can to inform our local and national communities, we're also working to make sure the results are as complete as they can be."

The team analyzed the anonymized medical records of close to 9.6 million Kaiser Permanente members in Southern and Northern California, and Washington state. They narrowed their focus to 1,277 who were hospitalized with clinically- or laboratory-confirmed COVID-19 between the beginning of 2020 and early April.

Researchers also observed hospitalization lasted 16 days or more for 25% of patients, contrasting with a widely used modeling study from Imperial College London that asserts that patients require an average stay of eight days based on healthcare needs.

The reasons behind these discrepancies are uncertain, but the analysis did show that the virus tends to infect older people the hardest, with approximately 50% of hospitalizations among adults, ages 60 and up, and 25%, ages 73 and up. Hospitalized men over the age of 80 faced a 58% risk of death, while hospitalized women of the same age faced a 32% risk.

Despite these negative findings, the study did reveal a decrease in the transmission rate of the virus that began slightly before statewide shelter-in-place orders went into effect in March. Researchers chalk this decline up to smaller-scale social distancing measures in the weeks prior to the statewide orders, showing that such measures are indeed helping to “flatten the curve” of the disease.

The authors warn, however, that society should not expect to return to normal soon, and that more data from different regions and under different healthcare settings are needed. They also caution against relying heavily on models based on data from other countries, and that releasing mitigation measures at one time will result in the virus spreading again and resurging.

"We're learning more about COVID-19 with each passing day and, as of yet, we have not identified any clear, evidence-based interventions to prevent hospitalization or critical illness among patients who have been infected," said Liu. "Instead, communicating with patients and communities about paying attention to steps that can reduce their likelihood of acquiring an infection in the first place is probably the best preventive step. We plan to have additional follow-up studies over time to reflect our changing understanding of COVID-19 and its impact."

The study was funded by Kaiser Permanente.

The findings were published in The BMJ.