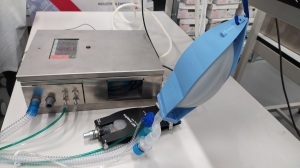 The Mechanical Ventilator Milano by the Global Argon Dark Matter Collaboration is an open-source device that can be manufactured using off-the-shelf components. (Courtesy of Global Argon Dark Matter Collaboration)
A group of physicists specializing in the dark matter composition of the universe have shifted focus to design an FDA-authorized, open-source ventilator that can treat patients with COVID-19.

The device, known as Mechanical Ventilator Milano (MVM), was designed by members of the Global Argon Dark Matter Collaboration, an international coalition dedicated to the study of dark matter, in six weeks. A small number of off-the-shelf components were chosen to build it so manufacturing could take place swiftly.

"As an open-source device the different components that are used in the design are known to the public, including the hardware and software components; and the software can even be downloaded and used as is,” Andrew Renshaw, an assistant professor of physics at the University of Houston and a member of the collaboration, told HCB News. “The idea behind this is that the design can then be picked up by different manufacturers from around the world and they can work with the MVM team to either use it as is, or make modifications that can be included in a model they would then market.”

The device consists of a pressure controlled valve, which enables air to flow into the patient’s lungs at certain pressures, and pressure sensors to monitor the flow of air into and out of the patient to ensure safety. It also has a pressure-operated relief valve for CO2 and air leaving the patient, and an oxygen sensor to monitor oxygen levels as oxygen enters and exits the patient. A microcontroller board manages the device, controls the hardware and ensures safety by implementing a touch screen and alarm system that can connect to the hospital central alarm system.

Non-healthcare organizations like the collaboration are increasingly jumping into the ventilator-making game to help offset shortages of the device, which are necessary for patients with severe cases of the virus. For instance, The FDA recently gave the nod to a ventilator built by NASA scientists, while Ford teamed up with GE to produce 50,000 ventilators within 100 days. General Motors has also pledged to build 30,000 for the national stockpile.

“So far the MVM team has produced 10-15 of the devices, which have now been sent around the world to various labs for testing and to help different countries understand how the device is produced and made to operate," said Renshaw. "The first goal of the team is to get at least 1,000 units produced in the U.S., Canada and Italy each. In the long-run we hope to have manufacturers around the world who could supply this much cheaper version of a mechanical ventilator to non-First World countries. As a note, in all of the countries of Africa (41 of them), there are only a total of 2,000 ventilators, but the population is ~1.2 billion people.”

The collaboration is using CERN Open Hardware Licence V2.0 as its open-source license. Manufacturers that make modifications to the device are required to relay that information back to the MVM team so it can be released to the public.