Trump halts US funding of WHO over failure to contain coronavirus

Trump halts US funding of WHO over failure to contain coronavirus 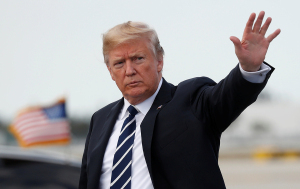 President Trump is halting funding to WHO over what he sees as its failure to effectively combat the ongoing coronavirus pandemic.
President Donald J. Trump announced a decision Tuesday to halt American funding to the World Health Organization, blaming the global entity for what he perceives as its failure to respond early to the coronavirus pandemic.

The commander-in-chief accused the organization of being responsible for a “20-fold” increase in cases worldwide, and criticized it for not embracing public health measures to help contain the spread, according to The New York Times. His remarks came one day before the number of confirmed cases worldwide surpassed two million.

“Had WHO done its job to get medical experts into China to objectively assess the situation on the ground and to call out China’s lack of transparency, the outbreak could have been contained at its source with certainly very little death by comparison,” he said in a press conference. “This would have saved thousands of lives and avoided economic damage.”

The U.S. is the largest donor for the institution, having contributed more than $400 million to cover roughly 15% of its budget last year, according to Reuters, which reports that the organization is seeking more than $1 billion in funding to fight the pandemic.

Trump previously threatened to withold funding to WHO earlier this month, reported CNBC, and accused it at this week's press briefing of promoting disinformation from China, arguing that it is the “duty” of the U.S. as its leading funder “to insist [on] full accountability,” and says his administration plans to review the organization’s role in combating the spread.

Special WHO envoy David Nabarro said in a webinar Wednesday that recriminations of any kind should be addressed once the pandemic has passed.

“If in the process you decide you want to declare that you’re going to withdraw funding or make other comments about the WHO, remember this is not just the WHO, this is the whole public health community that is involved right now,” he said without naming the United States or Trump. “Every single person in the world is a public health worker now, everybody is taking responsibility, everybody is sacrificing, everybody is involved.”
1(current)
2