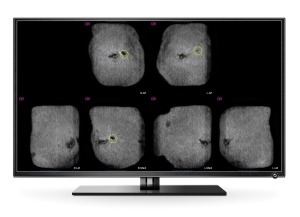 Screen image from QView Medical's QVCAD
In December, QView Medical received FDA PMA approval for its QVCAD solution for use with the GE Invenia 3D ABUS automated breast ultrasound system. In March 2017, it received the CE Mark for use of the product with Siemens as well as GE.

The AI product is used for screening asymptomatic patients with dense breasts after a negative mammogram.

CAD for mammography has become the standard of care, so it was natural for the company to develop a similar product, using deep learning for automated breast ultrasound exams, said Bob Foley, vice president of regulatory affairs and marketing strategy for QView Medical. Each ABUS exam leads to images with 2,000 slices, with a read time of five to eight minutes.

“We recognized there was a need to be able to read more productively,” Foley said. 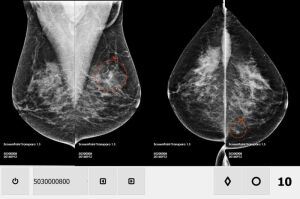 Nico Karssemeijer, the chief executive officer of Screenpoint Medical, said Transpara is different from CAD in that it provides more than a guide to the images.

“CAD systems are very limited because they only point out regions for radiologists to look at,” Karssemeijer said. “Our system interprets abnormalities and provides a cancer suspiciousness score for the whole mammogram that can be used as a second opinion. With the current release, we are reading mammograms as good as experienced radiologists.”

Karssemeijer stressed that the product is not intended to replace radiologists, noting that in the European market, two radiologists are required to read a mammogram.

“This is intended to partly replace one of the two,” Karssemeijer said. “There are some countries where there is a big shortage of radiologists. It’s only going to become more difficult with breast tomosynthesis. This is one of the big problems we have to solve before tomo is used for breast screening programs in Europe.”

The company is in the process of getting FDA clearance for Transpara and is currently doing clinical studies in the U.S. 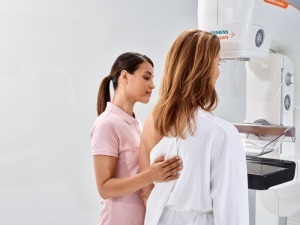 The MAMMOMAT Revelation also performs automated breast density measurement during the mammogram, instead of after the patient has left the imaging facility. 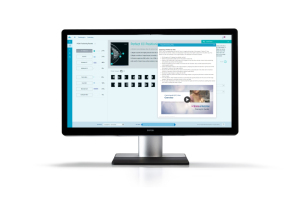 Volpara positioning feature
Volpara recently released a new software feature that provides feedback on how well the technologist did positioning the patient, by assigning mammographic studies into perfect, good, moderate and inadequate categories.

Training videos, which feature Louise Miller, co-founder of Mammography Educators, are embedded in the company's VolparaEnterprise software and will be based on exam statistics.

The software performs an automated assessment of positioning on every mammogram and will note, for example, if the technologist is not getting inframammary folds into the image, said Julian Marshall, Volpara’s chief product officer.

Since the feature is a quality control device, it doesn’t require FDA clearance.

The software, with cost depending on how big the facility is and how many mammograms it does, is designed to reduce the number of technical recalls, which facilities don’t receive reimbursement for.

“Our key products are being adopted by large health systems because they see it increasing quality across the system,” Marshall said.