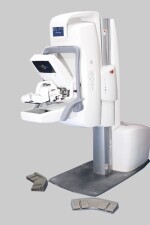 Pjerin Luli, vice president of U.S. sales and clinical education at Dilon, said the MBI biopsy system can locate lesions that are not detected with other modalities.

“How do you biopsy lesions not seen on ultrasound?” Luli said.

Luli said Dilon’s MBI product stands out from the competition by offering the ability to perform biopsy and also using air to cool its detectors instead of water. The system also offers a detector with a larger field of view, Luli said.

The company is planning its first installation of its first MBI system with biopsy in July 2018. 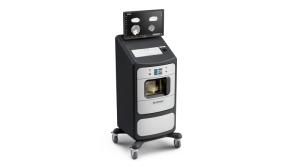 The compact mobile system is used in the operating room for quick excised specimen margin assessment during surgery. Wait times when sending a specimen to radiology can be 15 to 30 minutes during surgery, O’Driscoll said.

O’Driscoll said the company “brought specimens into the 3D world” with the launch of the VisionCT. The system can reconstruct the whole specimen volume — up to 512 frames — in under four minutes in addition to providing traditional orthogonal images in under 30 seconds, which means surgeons can move through the specimen in slices, with the goal of reducing re-incision rates and callbacks, according to O’Driscoll.

“They can interrogate the specimen to a far deeper level,” O’Driscoll said. “It’s far better to provide as much detail as possible and put that in the hands of physicians to make the ultimate call for better patient outcomes.

“Abnormalities in breast tissue are often caught at earlier stages now, thanks to advancements in imaging and breast screening. So there is a parallel need for ongoing advancements when assessing and confirming margin status during surgery,” O’Driscoll said. “With VisionCT, providers can now obtain a clearer, more detailed view of breast specimen margin status than ever before, helping to achieve better surgical outcomes. For decades we’ve been committed to pioneering new technologies that contribute to a higher standard of care for patients and we are proud that our legacy continues with the launch of this innovative new system.”
1
2(current)
3
4
5
6
7