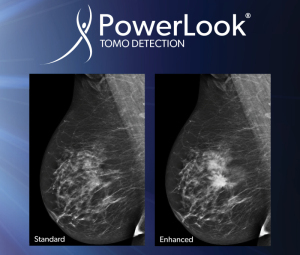 PowerLook Tomo Detection
The solution is available for use worldwide with GE Healthcare breast tomosynthesis, though the company received CE Mark approval for a new version of the product for use in Europe with Hologic and Siemens systems, as well as those from GE, and looks to having a solution available for other vendors in the future.

Traditional CAD technology “is a little more manual in how the algorithm is taught to look for cancer,” Hawkins said. “A researcher basically guides the algorithm to find cancer. Deep learning is a more advanced subset of machine learning. The computer learns the necessary features itself. We train it on actual cancer cases and it learns on its own what the characteristic features of cancer are. It’s a much more accurate technology. … Similar to 2D CAD, it provides them with a level of confidence, another set of eyes. It’s a lot easier in tomo to miss things because there’s so much information. We’ve heard customers say they’re less fatigued.”

The new product that is currently available in Europe detects soft tissue density and calcifications and provides more information on the certainty of findings, or “how confident the algorithm is,” with a confidence score from zero to 100, Hawkins said. 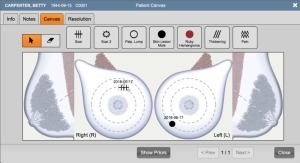 Ikonopedia Patient Canvas
Ikonopedia's software also employs what Crane said is the only "closed loop" tracking at a lesion-specific level, which prevents any finding from being lost to follow-up.

In December 2017, the company also released a full EQUIP module to support the new image quality requirements from the FDA.

The EQUIP software gives imaging departments the ability to report, track and address poor image quality at the point of read and also creates randomized audits for review. It then creates all necessary outcome reports.

"They never have to worry about doing a manual audit," Crane said. "We automate all necessary audits for them and they can be printed at the touch of one button."

IntraMedical Imaging
IntraMedical Imaging recently received CE Mark approval for the Node Seeker 2000, a wireless gamma probe with a tablet-based control unit that can simultaneously find primary tumors based on Iodine 125 (125I) radioactive seed localization and in the sentinel lymph node.

Farhad Daghighian, the chief executive officer of IntraMedical Imaging, said the system, released last year, gives an accurate estimate of the depth of the seed and corrects for the interference of technetium gamma rays while searching for the seed.

“The battery-operated tablet is made for medical use, and by wrapping it in a sterilized jacket, it can be placed on top of the patient in front of the surgeon so the surgeon would not need the nurses to adjust the sound or other parameters,” Daghighian said.

The market for the Node Seeker 2000 is general surgeons, surgical oncologists and nuclear medicine departments.

The Node Seeker 2000 can control gamma ray detection probes and beta probes that IntraMedical manufactures for detection of positron emitting tracers. These PET probes are being used for intraoperative detection of tumors filled by F-18 FDG.
1
2
3
4
5(current)
6
7