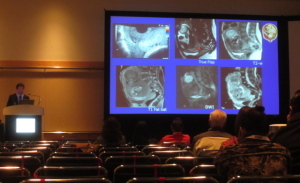 Dr. Gabriele Masselli's presentation
A slew of complications can arise during a pregnancy, many of which are difficult to spot even with advanced imaging technologies. At RSNA 2012, six researchers showed the signs and signals, possibly overlooked in the past, that improved sonogram and MRI technology can now reveal. Some of the papers also suggested the value of using MRI over sonogram when trying to detect particular complications.

The first paper presented sonographic predictors of Pregnancy Induced Hypertension, or PIH, which happens in 6 to 8 percent of all pregnancies and can contribute to low birth weight and other complications. The paper set out to measure the value of color Doppler sonography in detecting signs of the problem, namely uterine artery flow velocity.

The second paper explored the value of sonography in detecting partial molar pregnancy, in which an incomplete embryo starts to develop, a condition that has traditionally been more challenging to detect than complete molar pregnancy. The study found that dicidual thickening and/or masses can be found in 50 percent of ultrasounds performed on women with early partial molar pregnancies.

"Sonographic diagnosis of partial molar pregnancy in the first trimester is clinically relevant as it results in management with surgical evacuation and histological confirmation, which can lead to improved patient outcome from early diagnosis," said Dr. Elizabeth Lazarus, in her conclusion.

At the end of the presentation, a sixth paper also explored the value of improved ultrasound image technology, this time in detecting the signs of ectopic pregnancy, a pregnancy that occurs outside the womb. Transvaginal sonography demonstrated an adnexal abnormality in over 95 percent of patients with ectopic pregnancy, a result that matches prior studies.

New uses of MR for pregnancy

MRI is growing in popularity as a means of identifying certain birth defects and problems in pregnancy. The third paper presented showed the value of MR in pregnant patients who are experiencing pelvic pain, which can result from appendicitis or ovarian torsion. The study revealed the value of MR in detecting those causes and the need for surgery.
1(current)
2