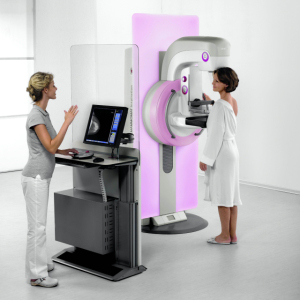 MAMMOMAT Inspiration Prime Edition
The need for radiation scatter grids for mammograms may soon be a problem of the past, suggests a new innovation Siemens revealed at RSNA 2012. The MAMMOMAT Inspiration Prime Edition uses a special algorithm to identify scatter-causing structures and calculate a corrected image using software rather than a scatter grid. That means dose can be reduced by up to 30 percent, compared with its predecessor model, said the company.

"It's a huge improvement," said Jennifer Okken, clinical product manager for women's health at Siemens. "Mammography is a screening where the patient comes in every year and might need additional images and things like that, so you want to try and keep the dose as low as possible."

When an X-ray beam enters a patient's body, some of the radiation particles veer off a straight path, creating a loss of contrast and definition in the image that results. To absorb scattered radiation in digital X-ray breast imaging, a special grid is placed between the breast and the detector. Because the grids also absorb part of the primary radiation, used to produce the image, a higher dose of radiation must be used to create the quality image that physicians need.

Without the grid, dose can be reduced by up to 30 percent depending on patient size, Okken said.

The new software algorithm works by identifying scatter-causing structures and correcting the image, allowing physicians to obtain the same image with a lower dose of radiation. At the Siemens RSNA 2012 booth, Okken showed two images from Siemens' traditional 2-D mammography, one with the grid in place, and one utilizing the Prime algorithm.

"There's really not much of a difference between the images at all," said Okken. "And the biggest improvement was on the imaging processing side, rather than adding a mechanical component."

That makes it a simple upgrade, since only the software has been changed; the system itself remains the same.

The MAMMOMAT Inspiration Prime Edition is not yet available in the United States, pending 510(k) clearance.