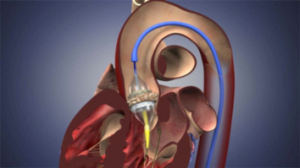 Image of Edwards SAPIEN Transcatheter
Heart Valve
It’s obvious that early discharge is beneficial from a financial standpoint, but it might also have clinical benefits.

Dr. Siddharth Wayangankar of the University of Florida led this study, which investigated the trend predictors and outcomes associated with hospital length of stay (LOS) following TF-TAVR.

The study included 24,285 patients who underwent non-aborted TF-TAVR and survived discharge from 2011 to 2015. They were categorized as early discharge, which meant their LOS was less than 72 hours, or delayed discharge.

Wayangankar and his team observed that there was a significant decline in the rates of delayed discharge during the study period — 62.2 percent in 2012 Q1 versus 34.4 percent in 2015 Q3.

The findings also revealed distinct independent predictors of early and late discharge. Wayangankar believes that these predictors could have a major impact on the future care of aortic stenosis patients.

Wayangankar told HCB News that the independent predictors of delayed discharge are patients who are over age 85, African-American or Hispanic and those who had prior MC procedures, diabetes, atrial fibrillation, and dialysis, among other factors.

Wayangankar believes that patients with delayed discharges might require a more rigorous follow-up schedule to mitigate the higher mortality and hospitalization rates.

The team noted their data on independent predictors should be prospectively validated within the Transcatheter Valve Therapy Registry. Once that is done, LOS calculators could help to streamline TAVR programs worldwide.