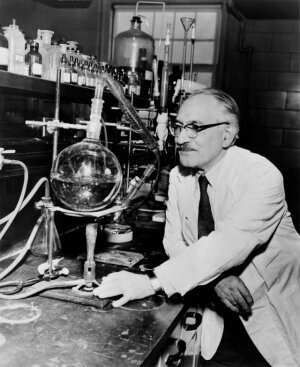 This month marks the birth of Selman Abraham Waksman – the Father of Antibiotics (born July 1888). But did he fairly and squarely earn this esteemed moniker?

At first glance, it would seem so. In total, the Ukraineborn professor identified more than 20 antibiotics, including actinomycin, clavacin, streptothricin, grisein, neomycin, fradicin, candicidin and candidin, among others. Waksman even coined the word ‘antibiotic’ in 1942.

Yet it was a team effort that led to the discovery of streptomycin and its effectiveness against tuberculosis, but Waksman unjustly took full credit for the finding.

While his 23-year-old graduate student, Albert Schatz, was carrying out streptomycin research in his Rutgers University basement laboratory, Waksman never visited him because he wanted to be as far away from the tubercle bacillus as possible. The professor only expressed interest once he realized that Schatz was onto a significant discovery. It was actually Schatz who solely isolated the antibiotic in 1943 after months of painstaking work.

In 1946, at Waksman’s insistence, he and Schatz signed the streptomycin patent assignment. This outlined that both men would receive the princely sum of $1 each, signing all royalty rights over to Rutgers. Schatz permitted this only because he wanted to see streptomycin swiftly and cheaply made available to the public.

Contrary to this agreement, Waksman secretly received $350,000 in royalties, although he publicly denied this. Meanwhile, the Rutgers Research and Endowment Foundation received $2,600,000 in royalties. Waksman contributed nearly 80 percent of his royalties toward the building and support of the Institute of Microbiology, which he established in association with Rutgers. And of the remaining 20 percent of the royalties assigned to him personally, Waksman used half to set up the Foundation for Microbiology.

Schatz upon discovering the secret dealings was understandably bitter and promptly sued both Waksman and the University in 1950. The case was settled out of court. In that settlement, Waksman acknowledged that Schatz was “entitled to credit legally and scientifically as co-discoverer, with Dr. Selman A.Waksman, of streptomycin.” The lawsuit also uncovered Waksman’s covert agreement with a pharmaceutical company which paid him $300 a month for exclusive information about the research going on in his laboratories, along with patent rights. While he was victorious in his lawsuit, the aftermath saw the scientific community almost completely shun Schatz.
1(current)
2