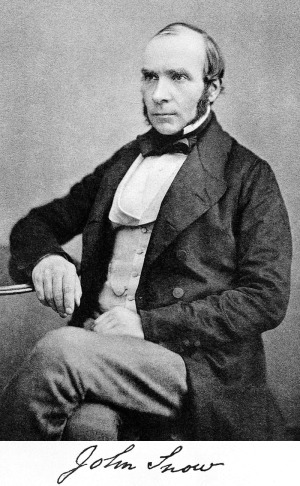 Long before Google started using its users’ search terms to try to track flu outbreaks, Dr. John Snow was laying the groundwork for the field of epidemiology.

Snow was born in York, England on March 15, 1813. He was the oldest of nine children born to a laborer and a homemaker. His childhood may very well have set the stage for some of his professional focus later in life. The family lived in one of the poorest neighborhoods in the city and the conditions were squalid with regular flooding from the Ouse River delivering water contaminated by effluent from street markets, graveyards and of course, sewage.

Snow, who proved to be a bright student, was taken on as a medical apprentice at the age of 14. At the age of 19, he witnessed his first cholera epidemic in an English coal-mining village. From there, his early career was a bit of a whirlwind. He worked as an assistant to coal mine company surgeons, enrolled in medical school by 23, started work at Westminster Hospital the following year and by 1838, he was a member of the Royal College of Surgeons of England.

While his contributions to the field of early anesthesia are notable and positioned him as the top anesthetist in Britain, even serving as the anesthesiologist for Queen Victoria during the births of two of her children, his work with hygiene and epidemiology position him as even more of a trailblazer.

Up until Snow’s time (and even well into his lifetime) there was a belief among many medical professionals that outbreaks of various diseases could be attributed to miasma theory – or essentially, noxious air. Snow discounted that theory however and based on his own observations, he attributed the spread of some disease via water harboring germs. Based on his research, he published an 1849 essay titled On the Mode of Communication of Cholera. He updated his theories in 1855 after investigating a cholera epidemic that impacted an area of Westminster the prior year.

His investigations led him to the source of the outbreak – a public water pump. Although he studied water samples taken from the well, he was not able to determine through that method whether the water was a health hazard. Unable to make a conclusion through studying the samples, he turned to the investigation of the pattern of the spread of the outbreak and based on that research, he convinced the authorities to remove the well pump handle, effectively putting it out of order. Following that action, the cholera outbreak faded quickly.

However, even armed with a map he created showing the cluster of cholera cases around the pump and evidence that the local waterworks was pumping sewage-polluted water from the Thames to homes, local leaders weren’t willing to invest more thoroughly in Snow’s theories and they replaced the pump handle after the outbreak subsided.
1(current)
2