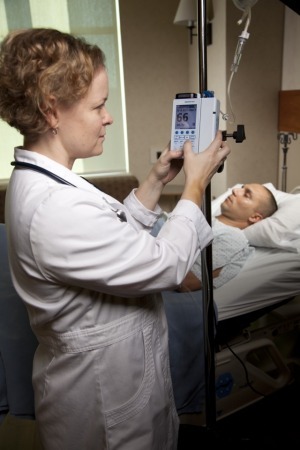 Over the last several years, infusion pump woes have been linked to a magnitude of adverse event reports and hundreds of fatalities, resulting in the introduction of the 2010 U.S. Food and Drug Administration’s Infusion Pump Improvement Initiative. Since the initiative’s inception, OEMs have encountered stricter regulations, and end users have been on the lookout for ways to boost their own infusion pumps’ ability to keep patients safe.

More than half of all surveyed providers in the country agree that integrating an electronic medical record system with infusion pumps is the next big step. Despite the consensus, fewer than 10 providers countrywide are actually doing this, and only 60 percent of providers currently have the proper wireless technology in place required for EMR integration, according to a KLAS report from March, which surveyed 251 providers from 218 organizations.

However, the demand for better, faster, more integrated data in the infusion therapy space has been gaining speed. And according to Eric Melanson, director of marketing, infusion systems, B. Braun Medical Inc, many providers previously reluctant to fully integrate pumps with EMRs have since changed course, now expressing their intent to do so in the near future. That about-face isn’t surprising — KLAS’ report notes over half of providers actually consider EMR integration key to future pump selection.

Perks of EMR implementation
In a nutshell, the largest cost in managing a health care facility is the nursing staff that spends 40 percent of their time documenting care — and if that care documentation is broken out, the lion’s share of it entails documenting IV medications. EMR can potentially give the nursing staff 20 percent more time to allocate where their expertise contributes the most value. Fully implemented, EMR reduces risk, lowers cost and improves patient care, according to Melanson.

Several health care providers have already implemented IV clinical integration technology and have seen positive results, such as a 27 percent reduction in nursing time to start a new infusion, according to a June 2011 statement from integrated health system WellSpan Health.
1(current)
2
3
4