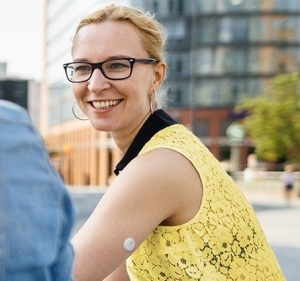 Abbott is hiring 1,000 new staff members to work in its new plant in Ireland for production of its Freestyle Libre continuous glucose monitoring system. (Photo courtesy of Abbott)
Abbott Laboratories is creating 1,000 new jobs as part of a $450 million (€440 million) investment in its operations in Ireland.

The company is expanding its manufacturing facilities in Donegal, and building a new plant in Kilkenny to support its Freestyle Libre continuous glucose monitoring systems, following “rapid growth” in the product, according to The Irish Times.

The company employs 5,000 people in all four of the country’s provinces. Recruitment for the new jobs will start immediately, with those hired working at a global manufacturing center of excellence for the Freestyle Libre 3 system. Jobs will be in engineering, quality control, medical device manufacturing and other science-based areas.

“Freestyle Libre is the number one product in the world for continuous monitoring and it continues to grow very quickly,” Jared Watkin, senior vice-president of diabetes care for Abbott, told The Irish Times. “Clearly, we need to keep up with that demand from a capacity and manufacturing investment perspective.”

The new 250,000-square-foot manufacturing facility will be located on the Industrial Development Agency Business and Technology Park in Loughboy.

Freestyle Libre continuous glucose monitoring systems are used by more than four million people with diabetes in over 60 countries. The Freestyle Libre 3 system eliminates the need for finger-prick tests several times a day. The sensor is the size of two five-cent coins and attaches to the back of the arm to track glucose levels.

It sends readings every minute to a smartphone app that shows current and past levels, how they are changing, and if levels are too low or high. Each sensor lasts for 14 days.

The solution is only covered in patients under 21. “This means that, despite diabetes being a lifelong condition, reimbursement is only available for people with Type 1 diabetes under the age of 21. It is not reimbursed for any person with Type 2 diabetes,” the company said.

Abbott has operated in Ireland for over 75 years, with its manufacturing site in Donegal and additional locations in Clonmel, Cootehill, Dublin, Longford, Sligo and Galway.

It is currently in the process of obtaining planning permission for the new facility, and hopes to open the new plant in 2024.

It also is investing further at its site in the Oxfordshire town of Witney in England. “With these recent expansions, Abbott now has significant production capacity across Ireland, the UK and the US,” said the company.