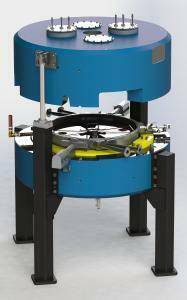 Operating in excess of 500 micro amp current, the cyclotron will be used for neutron beam generation in proton beam therapy and medical isotope production. It is the first of multiple High Current Proton cyclotrons that will be distributed by TBG throughout 2022.

BCS designed, developed and manufactured the system alongside Best Theratronics at their facilities in Vancouver and Ottawa, respectively.

It also is developing, designing and manufacturing a range of Alpha/Deuteron/Proton Cyclotrons, with energies ranging from 1 MeV to 600 MeV.

“Now we can offer a range of cyclotrons for medical radioisotope production and research, with 7.5, 15, 20, 25, 30, 35 and 70 MeV cyclotrons; and 400 MeV rapid-cycling medical synchrotrons for heavy ion particle therapy from proton to carbon-heavy ion radiation therapy, revolutionizing cancer treatment,” Krishnan Suthanthiran, president and founder of TeamBest, told HCB News at the time.

The company has increasingly focused on more advanced therapies like carbon therapy. In 2020, it announced plans to install the first rapid-cycling medical synchrotron in the world at the University of Wisconsin Medical Radiation Research Center for this purpose. This included plans to assemble and test the very first of Best Particle Therapy’s 400 MeV Rapid Cycling Medical Synchrotron (iRCMS).

The iRCMS offers variable energy, heavy ion treatment technologies for proton-to-carbon heavy ion. This enables clinicians to apply precise, conformal and hypo-fractionated radiation therapy in the treatment of their patients. Manufacturing, assembling and testing of the entire system was expected to take two to three years, with treatment targeted primarily toward Midwest patients in states like Illinois, Wisconsin, and Indiana.

"We are excited and proud to have UWMRRC partner with us in introducing this highly advanced carbon therapy for very accurate treatment of tumors ... Our goal is to make this affordable and accessible globally," Krishnan Suthanthiran told HCB News at the time.

TeamBest did not respond to HCB News for comment.