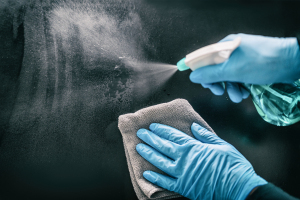 Greater sanitization of equipment and PPE use are required to prevent transmission of COVID-19 from asymptomatic carriers
The risk of an asymptomatic patient entering a healthcare facility is real and increases the chance of transmitting the virus to other patients and staff.

Radiologists at Johns Hopkins recently encountered two such incidents in a study involving patients undergoing CT scans for non-COVID reasons. Both were part of the number of patients whose exams were pushed back when the virus first broke out.

“It is incumbent upon radiology practices to take measures to protect their staff and patients in all practice settings,” wrote lead author Dr. Megan Lee and her colleagues in their study.

A 42-year-old woman scheduled for preoperative CT scans of the abdomen and pelvis at an outpatient center was screened by phone for symptoms the day before her exam. Upon her arrival, no temperature check was performed, but technologists wore face shields, surgical masks and gloves when examining her. Her scans showed the incidental appearance of the virus which was later confirmed with lab testing.

The second patient was a 49-year-old woman admitted to the ED with weakness, abdominal pain and nausea. She denied having a fever, chills, chest pain or a cough and had no sick contacts, so providers did not label her as under suspicion for the disease. Suspicious CT findings were confirmed with a positive lab test.

The radiologists say the cases are examples of why thorough sanitizing practices in between patients are essential, as is frequent use of PPE. While they still recommend screening via phone, they say that it is not enough to stop patients with the virus from showing up at places like the outpatient center or ED.

“As more patients present for elective imaging that was previously postponed, it remains important to maintain a high level of vigilance to curb the spread of the virus,” said the researchers. “Given the negative outcomes with delaying care (medical and economic), institutions are now implementing other means to curb transmission rather than drastic reductions in services.”

The findings were published in Radiology Case Reports.