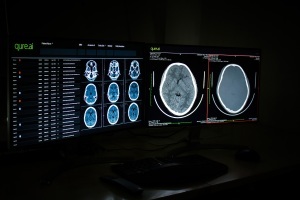 qER can identify intracranial bleeds, mass effect, midline shift, and cranial fractures on head CT scans.
Qure.ai has scored what it is calling the first 4-in-1 FDA clearance for an AI solution designed to interpret medical scans.

The Mumbai-based company is bringing to the U.S. market its new head CT scan product, qER, which is designed to triage medical images depicting intracranial bleeds, mass effect, midline shift, and cranial fractures. The ability to interpret all four conditions enables the qER suite to triage nearly all critical abnormalities visible on routine head CT scans, with two, cranial features and midline shift, exclusive to the solution, according to Dr. Pooja Rao, co-founder and R&D head for Qure.ai.

“In patients with trauma, cranial fractures are often indicators of clinically significant injuries. Whether or not operative treatment is indicated, early neurosurgical attention is imperative. Cranial fractures are also the most commonly missed major head CT scan abnormality among U.S. radiology residents,” she said, adding also that “identifying midline shift, especially early or subtle onset, can significantly improve patient outcomes. In emergencies, it is not always a neuro-specialist taking the first look at the study. Automated midline shift measurement would provide value to nonspecialists, especially those who read images in emergencies.”

Cranial fractures, especially ones at the base of the brain, result from head injuries. While most non-depressed skull fractures are usually treated conservatively, there are those that require neurosurgical treatment. Midline shifts are closely related to intracranial pressure, which leads to brain stem compression and eventually death if not treated. Such conditions partially contribute to the more than 10,000 people who die within seven days of an emergency room discharge, despite there being over 75 million CT scans performed annually in the U.S.

The qER suite adapts directly to the radiology workflow, prioritizing critical cases on the work list and reducing the time needed to open critical scans. This enables radiologists to read the scans of patients with time-sensitive abnormalities faster and immediately act to help patients.

Extensive validation of the product was conducted, including a study submitted to the FDA which showed the solution capable of reducing the time between a scan and reading it from 65 minutes to two minutes, a 97% decrease. This means that radiologists can read emergent studies in less than 30 minutes, their turnaround time for such reports. A 2018 peer-reviewed publication in The Lancet also found qER to be efficient in identifying abnormal head findings.

Rao says there are plans to obtain more clearances for this product, as well as introduce others in the U.S.

“We are planning more clearances for head CT scan capability, as well as for our flagship chest X-ray AI product, qXR,” she said. “Clinical studies toward these clearances are ongoing.”

Breaking down the challenges of justification for medical imaging exams