Expanded access to proton therapy should also have a direct correlation on the number of radiation oncologists who are trained to offer it. 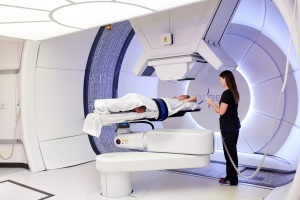 Insurance coverage for pediatric proton therapy has become increasingly available, as evidence has illustrated the quality of life benefits for patients with certain cancers in com- parison to conventional radiation therapy.
“When physicians are trained in radiation therapy, they’re not trained to use protons unless they’re at a facility with access to it,” said Dr. John Breneman, medical director of the Cincinnati Children' Hospital Medical Center UC Health Proton Therapy Center. “Most major cancer centers now offer proton therapy. But those are still the minority of programs where radiation oncologists are trained.”

Flash therapy, in which large doses of radiation are delivered in a fraction of a second, is also stirring optimism in the proton community. The speed of the dose is expected to help it irradiate tumors while sparing healthy surrounding tissue, and in the process, lower entire treatment time from the typical seven weeks to less than a second. Advocates of the practice say such benefits may ultimately lead to greater access to cancer treatment at lower costs.

“I do hope we will see it in several years clinically,” said Stolpner. “The main thing about Flash is that it will make proton therapy more affordable, because in theory, we will be able to use three or four fractions instead of 30.”