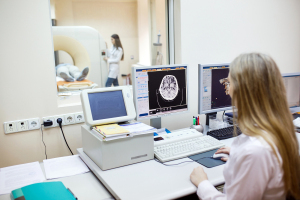 Spanish researchers at the University of Malaga (UMA) have found a way to increase the quality of MR images from low resolution to high resolution, without distorting the patient’s brain structures.

The researchers carried out the approach with a deep learning artificial neural network they designed based on the functioning of the human brain. The algorithm, they say, is capable of "learning" how to increase resolution without distorting structures, and can produce accurate results in less time than standard approaches.

Thurnhofer asserts that the technique enables clinicians to identify findings in images alone, without supervision, and that specialists will be able to identify brain-related pathologies, such as physical injuries, cancer or language disorders among others.

In addition, quality of images is not based on the time the patient remains immobilized in the scanner, as imaging processing takes place later. Because the image details are thinner, clinicians can also avoid additional tests used for when diagnoses are uncertain.

"It is expected that this method will serve in the specialty of neurology, oncology, and in general all those that need to make diagnoses using three-dimensional magnetic resonances," said the authors. "The next steps are the experimentation with other types of medical images that are not magnetic resonances, and the validation of the results obtained to ensure that no artefacts (defects) appear that were not in the original low resolution image."

Once fully developed and validated, the team will consider seeking FDA clearance with the help of other foreign research groups it collaborates with. Such an objective is at least five years away, they say.

Much of the image reconstruction technologies in deep learning and AI have been designed for CT scans, but some innovations around MR are making headlines. For instance, United Imaging recently took home top prize in a competition hosted by Facebook AI Research and NYU Langone Health in the multi-coil 4x acceleration category for accelerating MR scans with AI.

UMA’s findings were published in the journal, Neurocomputing.