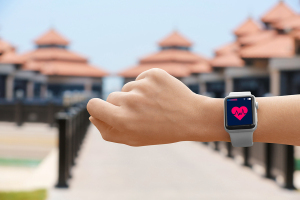 When the preliminary results of the Apple Heart Study were presented at the 2019 Scientific Sessions of the American College of Cardiology, they created quite a stir. This research trial, which included more than 400,000 participants self-enrolled over the internet, demonstrated the ability of wearable technology to detect atrial fibrillation (afib), a leading cause of stroke and hospitalization in the U.S. Suddenly, the lines began to blur between wearable devices used largely for fitness monitoring and health awareness and true medical devices used to detect and monitor disease. The promise was clear, that the current model of episodic intermittent care could someday be replaced with continuous remote monitoring of multiple physiologic parameters using easily accessible, user-friendly consumer technology that might prevent disease before it strikes.

Almost immediately, however, the predictable backlash ensued. Critics cautioned the study was not a randomized control study, the gold standard of clinical research, so it couldn’t provide any insight into the device’s real impact on health. There may be many false positive alerts, in which the watch delivers an alert to people who do not have atrial fibrillation, causing a huge burden on our already overburdened health care system, or false negatives where the watch misses true episodes of atrial fibrillation. The harms of potential treatments could outweigh any benefits of stroke reduction.

So where do we draw the line between hype and hope?
We may find some clues in another area of cardiology where clinicians have been struggling to implement the promise of remote patient monitoring. Remote monitoring of patients with implantable cardiac devices such as pacemakers and implantable defibrillators took a giant leap forward in 2001, when devices paired with bedside home transmitters were developed that could communicate with each other wirelessly, using radiofrequency energy. This allowed the implantable devices to transmit data automatically if certain abnormal criteria were detected. These “alerts” were easily accessible by clinicians through a dedicated web portal. The remote monitoring alerts informed clinicians about changes in device function or new abnormal heart rhythms that might have otherwise gone undetected until the patient’s next office visit. Nonetheless, adoption of remote monitoring has been much slower than anticipated. Some of the same factors that impact adoption of remote monitoring in this population may provide perspective on the road ahead for the larger populations involved in consumer wearables.
1(current)
2
3
4

HIMSS pushes back 2021 conference to August due to coronavirus uncertainty