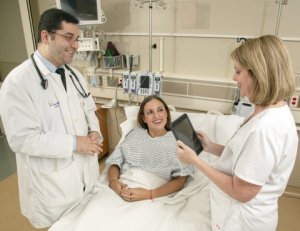 Allscripts and Northwell have formed a venture to create a next-gen EHR system.

“We are excited about the possibilities that this alliance with Allscripts will generate,” Northwell Health’s President and CEO Michael J. Dowling said in a statement.

The deal will see the computing technology expertise of Allscripts meld with Northwell’s clinical and operational strengths “to create a dynamic, patient-facing tool that will arm clinicians with knowledge to provide exceptional care to our patients,” he added.

The new effort will build on their earlier work together. Northwell now uses Allscripts Sunrise EHR in 19 of its hospitals and Allscripts Touchworks in over 750 outpatient practices that it owns and operates in the New York area.

Northwell first began using Allscripts’ EHR in 2009, and this partnership having “been successful for many years,” stressed Allscripts CEO Paul Black, means that the two firms “are positioned to develop and launch the electronic health record of tomorrow.”

The goal, he advised, was to “help lead the healthcare IT industry into the future.”

Northwell Health is New York State’s largest healthcare provider and private employer, with a total of 23 hospitals, as well as its outpatient facilities and over 13,600 affiliated physicians. It cares for roughly two million patients a year.

Its latest expansion in the region was in July, when it formed a joint collaboration with Integrated Oncology Network (ION) to run a radiation oncology center in Forest Hills — its first radiation therapy center in Queens.