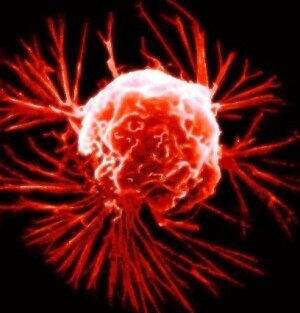 Once activated by the ultrasound,
the immune system might even
seek and destroy cancer cells
On the Duke University's Pratt School of Engineering website it was reported that an intense form of ultrasound that shakes a tumor until its cells start to leak can trigger an "alarm" that enlists immune defenses against the cancerous invasion, according to a study led by researchers at the institution.

The new findings from animal experiments suggest that once activated by the ultrasound, the immune system might even seek and destroy cancer cells, including those that have spread through the bloodstream to lurk in other parts of the body.

This high-intensity focused ultrasound, or HIFU, is in use or testing in China, Europe and the United States to kill tumors by heating them. But Duke researchers now find that HIFU might work even better if it is first delivered in a manner that just shakes the cells. That shaking ruptures tumor cell membranes, causing them to spill their contents. The toxic spill then alerts the immune system to the cancer threat, leading to the production of tumor-fighting white blood cells.

If the effect seen in mice holds true in humans, such a treatment could be an important advance in many cancer therapies because of its potential to tackle both primary tumors and metastatic cancers that have spread to other organs -- all without the need for surgery, the research team reported in the Journal of Translational Medicine on Aug. 3, 2007 (a "provisional" version appeared online on July 11). The work, done by the engineers in collaboration with cancer immunologists and physicians at the Duke Comprehensive Cancer Center, was supported by the National Institutes of Health.

"In most cancers, what actually ends up killing the patient is the spread of the cancer from its original site to other parts of the body," said Pei Zhong, an associate professor in Duke's mechanical engineering and materials science department. "If the patient has a tumor in the kidney or liver, several treatment options -- including surgery, radiation or HIFU -- can be used to get rid of the cancerous tissues. However, if the cancer cells spread to other vital organs such as the lung or brain, the outcomes are often much worse.

"HIFU in the current form can only be used to treat the primary tumor," he continued. "We now think that HIFU delivered in a different mode, with emphasis on using mechanical vibration to break apart the tumor cells, may have an even more significant impact in suppressing cancer metastasis by waking up the immune system."

For reasons that are still not completely understood, cancer cells often go largely undetected by the immune system, Zhong said. For an anti-tumor immune response to be effective, it may need to recognize not only the surface proteins of cancer cells, but some of the other proteins locked inside those cells, which Zhong called "danger signals."

The researchers found in mice with colon cancer that mechanical HIFU delivered to the animals' tumors sparked an immune response twice as strong as did thermal HIFU, presumably by releasing a much more diverse range of danger signals.

"Our results show that while mechanical HIFU is not as effective as thermal HIFU in killing tumor cells directly, it has the potential to induce a stronger anti-tumor immune response," Zhong said. "These preliminary findings open up the possibility that we could use heat from HIFU to treat the primary tumor and HIFU-boosted immunotherapy for combating any residual and metastatic tumor cells."

The lead author of this study is Zhenlin Hu, a former research associate in Zhong's lab who is now at the Second Military Medical University in Shanghai, China. Other co-authors include: Yunbo Liu, Georgy Sankin and Eric Pua from the Department of Mechanical Engineering and Materials Science at Duke's Pratt School of Engineering, as well as Xiao Yang, Michael Morse, H. Kim Lyerly and Timothy M. Clay from the Duke Comprehensive Cancer Center.