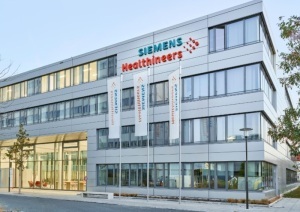 Siemens Healthineers has officially opened its new corporate headquarters in Erlangen, keeping alive its 140-year tradition of maintaining a presence in the city.

“When we first discussed the construction of new corporate headquarters within the Siemens Healthcare management team a good four years ago, it quickly became clear that we wanted to stay close to our roots in Erlangen. Our new headquarters show that clusters of excellence are able to positively shape a whole region in Germany and attract follow-up investments,” Michael Sen, member of the managing board of Siemens AG and chairman of the supervisory board of Siemens Healthineers, said in a statement.

The new HQ sits only a few hundred yards away from the site of the HQ of Siemens' predecessor firm Reiniger, Gebbert and Schall. That former administration building now houses the Healthineers MedMuseum.

The HQ will be the nerve center for the managing board and other central functions, including human resources, finance, communications and marketing.

The new working environment was designed with an aim toward the future, and to foster better collaboration between employees and with customers. To those ends, it has about 75 “think tanks”, where workers can focus on work, make calls and meet. In addition there are 14 “Meet and Talk” rooms for less formal gatherings, and 40 conference rooms for more structured meetings.

“Siemens Healthineers is a young company that also has a long tradition – and nowhere is this as clear as in Erlangen. As an independent, publicly listed company, we want to shape the future of medicine from a position of global leadership,” said Dr. Bernd Montag, CEO, Siemens Healthineers. “With our new corporate headquarters, we have created a dynamic and flexible contemporary working environment that will allow us to implement the targets we have set ourselves for our customers and partners,” he added.

Local citizens are delighted that the company will maintain and expand its presence. “Since its historical beginnings in the 19th century, medical technology from Siemens has always been closely linked with Erlangen. Thanks also to the presence of Siemens Healthineers, both our city and the Medical Valley EMN can benefit from a concentration of research and educational institutions, clinics and service providers in the fields of medicine and medical technology that is unique within Germany,” said Dr. Florian Janik, mayor of Erlangen.

Siemens Healthineers shares surged after its Frankfurt Stock Exchange IPO in March. Buyers snapped up 150 million shares, representing 15 percent of Healthineers. Siemens stated that it intended to continue as a majority shareholder for the long haul, according to reports at the time.

The IPO had been a long time coming, with news of the intention to list Healthineers first breaking in November, 2016.