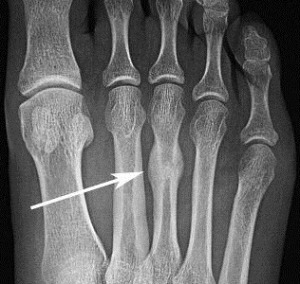 Images in a long-distance runner
with left foot pain without a
triggering acute traumatic event.
MR imaging was the most commonly performed procedure at the 2016 Summer Olympic Games in Rio de Janerio, according to a new study published in Radiology.

Researchers at Boston University School of Medicine investigated sports-related injuries to help plan imaging services for future events and to determine how some injuries could be prevented.

“These elite athletes are at risk for injury, and the medical teams onsite will do anything to ensure a fast return to competition or initiate the next appropriate measures in light of more severe injuries,” Dr. Ali Guermazi, vice chair in the radiology department at Boston University School of Medicine, said in a statement.

Guermazi and his colleagues examined data on 1,101 injuries sustained by 718 of the 11,274 athletes. Out of the 1,015 imaging exams performed, nearly 60 percent were MR, 30 percent were X-ray and about 10 percent were ultrasound.

Gymnastics had the highest number of athletes who underwent imaging exams — followed by Taekwondo and beach volleyball. At 293, athletics, which includes track and field, required the most exams.

The part of the body that was imaged the most was the lower limb — making lower extremity imaging exams the most common. The second most frequently imaged body part was the upper limb.

The highest imaging utilization rates took place on the fifth and twelfth days of the event. The researchers assume that’s because those days involve judo and athletics, which both had high proportional utilization rates.

“These findings will help to plan for increased availability of imaging services during those expected peaks,” said Guermazi.