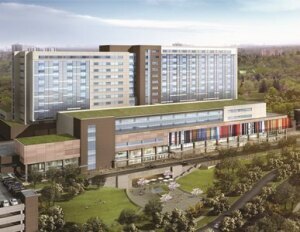 “If you really reflect on your current personal life — how you interact with your environment — it looks like something that is mobile and connected and that you have an application for anything you require,” said Tara Mahoney, health care practice leader for Avaya in the U.S. and Canada.

But when people are talking about life and death situations in a health care organization, the communication abilities and offerings are anything but mobile or intelligent, she added.

Avaya specializes in integrating various forms of communications so staff members are able to communicate and collaborate on any device from any location.

Humber River Hospital was built in October 2016 and is a reflection of what is modern in all aspects, including its communication capabilities, said Pete Bak, chief information officer of Humber.

“Because of its sheer size — 1.8 million square feet and 656 beds — there is a lot of distance traveled and walking to be done,” he said.

Ineffective communication has been pinpointed as the cause of 66 percent of reported medical errors. Plus, it has been said that more than 25 percent of hospital readmissions could be avoided with better communications among health care teams and between providers and patients.

Because of that, connecting people and allowing them quick and efficient communication became the highest priority at Humber, and the executives worked with Avaya to find the best solutions. Since the hospital’s opening, staff is able to access relevant information anytime, anywhere via email, instant messaging, telephone and video.

The hospital provides rugged devices to its nurses, code team members, lab technicians and porters. These devices include tools such as applications for nurse assistance, code calls, alarms and alerts. Plus, the devices can also give the right people information on critical lab results or such things as a bed exit alarm.

“It’s expensive to give everyone a rugged device, so we implemented a bring-your-own device strategy to some staff,” Bak said. “We put a lot of applications on those devices. We leverage costs also, by providing mobile workstations. These are absolutely critical.”
1(current)
2

How healthcare providers are adapting in the era of telehealth, and why radiology was uniquely suited to go hybrid