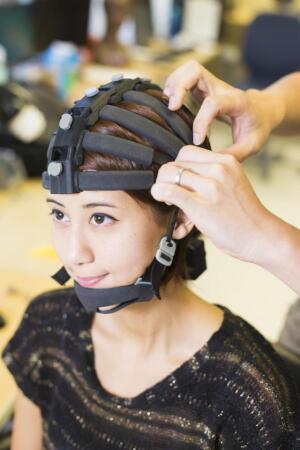 Courtesy: Jacobs School
of Engineering/UC San Diego
The first portable brain monitoring system with an unprecedented 64 channels could one day help people with all kinds of situations. The headset could detect an oncoming seizure for those with Parkinson’s disease or alert sleepy truck drivers to their lack of awareness on the road.

Bioengineers and cognitive scientists from private companies and from the Jacobs School and the Institute for Neural Computation at the University of California San Diego have created this dry-electrode, wearable EEG headset. An EEG tests electrical activity in the brain through electrodes attached to the scalp. Most headsets up to this point used wet sensors to attain better signal capturing.

“Other portable headsets have been designed before. But this is the first high density system with 64 channels, which is comparable to research-grade EEG systems,” Tim Mullen told HCB News. He is lead author of the study, alumnus of UC San Diego, and CEO of QUSP.

“We’re going to try to understand what the neuro code is, that is related to specific emotional and cognitive states,” Mullen said. “That may take 10 or more years. Meanwhile, a great amount of potential in these devices can be found in the health care and wellness field.”

These headsets and software could one day be used in the entertainment field with games that respond to some measure of your cognitive or emotional state, he added.

The information collected from the headset is analyzed by software which helps separate the brain data in real time. The software also removes unneeded noise during the gathering of brain activity. The brain signals get traced and then used to build a map of the individual’s brain activity.

The researchers’ goal was — and continues to be — to get the EEG away from the laboratory setting, where it is currently confined by wet EEG methods. By having it portable, it allows it to be used in peoples’ daily lives. In the future, they hope to use their creations that work with smart phones to track brain states and boost the brain’s capabilities.

“You will be able to work in subjects’ homes. You can put this on someone driving,” said Mike Yu Chi, CTO of Cognionics and also an alumnus of the university. He led the team that developed the headset.

It took more than four years to find the exact materials for the sensors that work on the subject’s hair and those on bare skin. The next step is to help improve the headset’s performance while subjects are moving. Anything more strenuous than walking doesn’t allow the signals to be captured well.

“This has been a long project. Our research started 10 years ago,” Mullen added. “A Holy Grail in our field is to track meaningful changes in distributed brain networks at the sped of thought, We’re closer to that goal, but we’re not quite there yet.”

The invention and its software were introduced in the paper, “Real-time neuroimaging and cognitive monitoring using wearable dry EEG”, published in the journal IEEE Transactions on Biomedical Engineering.