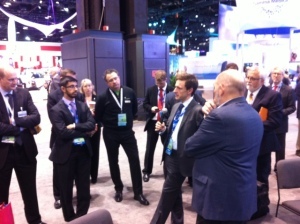 RSNA 2015
In a classic “no good deed goes unpunished” scenario, representatives of two professional organizations are scrambling to get control over the widespread practice of using cell phones to document patient disorders.

“It is very tempting now for physicians and other clinicians to take a photo with a cell phone of a patient condition or injury,” Kim Garriott, principal consultant with Logicalis told HCB News. She has been retained by the Society for Imaging Informatics in Medicine (SIIM) and the Healthcare Information and Management Systems Society (HIMSS) to lead a work group writing position papers on the issue to set new policies.

She said this practice — spawned by the widespread use of improved cameras in cell phones and tablets — creates several problems. Some of these problems have resulted in HIPAA fines for hospitals and doctors, according to Garriott.

“People end up storing these photos on their cameras, or emailing on an unsecured network,” she said. “Or they paste them into electronic health records and no one else, including consulting physicians, knows they are there. In essence the practice creates an image without an order.”

Garriott cited one case in which the ED photos of a patient’s mangled hand displaying surface damage were not available to a plastic surgeon that worked to repair internal injuries.

“It would have been nice if the plastic surgeon had access to the ED photos taken with a cell phone,” she said.

Garriott led a discussion group at RSNA with physicians and informatics and imaging specialists about a wide range of problems this practice creates. She said the group agrees this practice is not an intelligent way to use medical data to provide the best care for patients.

Dr. James Whitfill, who is a practicing internal medicine specialist, CMO for an ACO and consultant, told HCB News that the widespread use of cellphone cameras has coincided with the rapid expansion of EHRs to exacerbate the problem.

Another physician in the group, Dr. Christopher Roth, a radiologist and vice chairman of IT and Clinical Informatics at Duke University School of Medicine, said trying to get the picture archival system in radiology and most electronic health records to work together “is sometimes like trying to get a square peg into a round hole.”

The group of about 40 who attended the work group discussed a wide range of topics. These included:

- Creating a strong hospital governance committee “with teeth” to get control over securely storing and sharing photos taken with cell phones, scopes and video recordings initiated outside the imaging department.
- Soliciting the help of EHR vendors to offer better solutions in their products.
- Education among doctors and other caregivers about the problem and the safety of secure networks that are available. An ED doctor spoke about referring hospitals not wanting to upload trauma images to their network because of the erroneous belief it was not a secure network.
- Working to standardize or reduce different viewing devices often favored by different medical specialties, such as cardiac and orthopedics.
- End the practice of giving patients CDs of their images and expecting them to be responsible for getting this secure information to their doctor.

Dr. Alexander Towbin, chair of Radiology Informatics at Children’s Hospital in Cincinnati, predicted that it will take a few years for the group's work to get widespread guidelines in place.