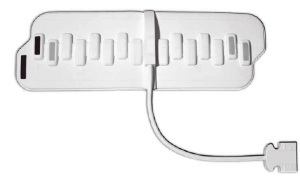 Deep in a basement at NYU Langone, researchers and engineers are hard at work developing innovative MRI coils — a component whose importance in MRI imaging is all too often overlooked, according to Dr. Daniel Sodickson, professor and director of the Center for Biomedical Imaging at NYU Langone Medical Center.

“If you have a wonderful scanner but a terrible coil, you’ll get a lousy image,” he says. “If you have the right coil, you could boost the performance of the scanner as If you’d paid another million dollars.”

The dedicated RF coil laboratory sports one-of-a-kind prototypes the likes of which you’d be hard- pressed to find anywhere else in the world. Many of them of them are still in the nascent stages of design, slabs of hot glued Styrofoam overlaid with intricate circuitry and wires.

They bear little resemblance to commercial coils, lacking the plastic covering that hides what Sodickson calls “the innards.”

Sodickson shows me one mask-like coil that resembles a device straight out of a science fiction flick. “For the eyes,” he explains with a grin.

Follow the leader
Back in the early 2000s, when manufacturers began to increase the magnetic field strength in their MRI scanners to produce a better signal to noise ratio, something unforeseen happened: researchers noticed that the coils that performed well with low field strengths were no longer well-suited for scanners with higher field strengths.

This is because magnetic fields behave differently at a higher operating frequency. “At some point, the body bends the magnetic frequency like a lens,” explains Sodickson.

Practically speaking, this means when a coil designed for an older scanner is used in a newer, more powerful 7-Tesla machine, it generates images with uneven bright and dark spots because the coil inadvertently registers other properties in the body such as salt content and tissue conductivity.

To address this problem, manufacturers are now starting to create MRI scanners with multiple transmit coils rather than just one — a technology known in the industry as parallel transmission. Using multiple transmitters, doctors can steer the scanner’s magnetic fields and illuminate the bright and dark spots to even out the image.

Scientists hope that multiple transmitters will one day enable them to target a specific area of interest rather than imaging whole slabs of anatomy. “The holy grail is being able to put the signal somewhere exactly,” says Sodickson.

Bent out of shape
The newer 7-Tesla machines also led scientists to another discovery that called long-held assumptions about coils into question.
1(current)
2
3
4