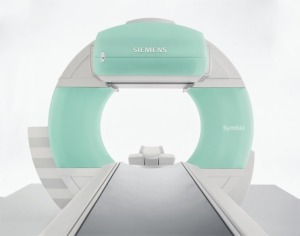 The standalone SPECT market is facing threats left, right and center. Not only is there the recent medical imaging isotope shortages to contend with, but more and more doctors are migrating to hybrids like SPECT/CT. And positron emission tomography may now be poised to blow SPECT completely out of the water.

As a result, SPECT has seen zero growth and is beginning a downward trend, with an estimated 17.0 million nuclear medicine procedures performed on SPECT or SPECT/CT cameras in 2010, compared to 17.2 million procedures performed in 2007, according to a report released in October by research firm IMV Medical Information Division.

Chad DeGraaff, product manager at Siemens Healthcare, says his 55-year-old aunt was having chest pains. After carrying out a SPECT study on her heart, doctors discovered a perfusion deficit. Surmising she had a blockage in one of her coronary arteries, they promptly sent her to a cath lab. After the SPECT/CT study that followed, DeGraaff’s aunt was finally able to breathe a sigh of relief as she was deemed A-OK.

“My aunt is not a small person and she has rather large breasts,” he notes. “The study looked to be positive from the nuclear exam study, but because of the amount of breast tissue, the photons couldn’t penetrate through her breast tissue; SPECT/CT allows us to correct for that absorption. If she had a SPECT/CT done from the beginning, they would have said, ‘You’re fine, go home and relax.’”

While IMV Medical Information Division’s report states that dual-head SPECT cameras are the most popular camera type being considered, comprising nearly half of planned camera purchases, SPECT/CT are increasingly being adopted, comprising one-third of the planned cameras. There has been a slowly increasing adoption rate toward SPECT/CT year over year, enabling physicians to merge functional imaging from a nuclear medicine study with anatomical information from the CT.

The market’s shift to SPECT/CT has meant more money, as a typical SPECT camera is in the $300,000 range and a SPECT/CT is twice that, according to Satrajit Misra, head of business development and marketing for nuclear medicine at Philips Healthcare.

But unlike the transition from PET to PET/CT, which seemed to happen overnight, the adoption of SPECT/CT has been a much slower process. The increased cost associated with moving to SPECT/CT, along with reimbursement cuts, has impacted customers’ purchasing decisions. DeGraaff adds that SPECT itself is not yet completely redundant.
1(current)
2
3