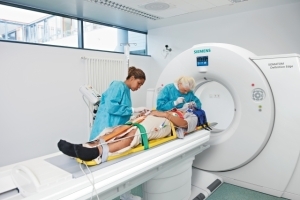 Previously tarnished by bad publicity surrounding safety scares, the computed tomography market has made major steps to get back into the public’s good graces. Learning from past mistakes, manufacturers, vendors, health care workers and patients are now better-informed and aware, with all eyes on dose reduction. A quick scan of the CT market reveals a number of positive, revolutionary advancements.

Make room: CT market balloons
CT’s use in the U.S. has increased more than twentyfold since 1980. Approximately 70 million CT scans were performed in 2009. Driven by low-dose and high-slice systems, the CT market – estimated in 2010 to be worth $3.4 billion – is predicted to reach $4.8 billion by 2017, with a compound annual growth rate of 5 percent, according to a report published last month by research firm GlobalData.

The expanding role of CT in the diagnoses and early triage of patients with acute and sometimes life-threatening illnesses may be responsible for this rise in utilization, states a study published in August by the American College of Emergency Physicians. CT use is particularly booming in the U.S. hospital emergency department, where one-third of CT scans take place daily.

“CT remains the highest volume advanced modality in the ED, because it’s a very rapid modality and its breadth and spectrum of applications is increasing every day,” says Murat Gungor, Siemens Healthcare’s senior director.

While CT utilization blossoms, new legislation surrounding the market, including the Deficit Reduction Act of 2005, has resulted in a “dramatic” decline in the purchase of new CT equipment, notes Joseph Cooper, director of Toshiba Medical Systems Corporation’s business unit.

“The DRA lowered reimbursement rates for imaging centers to that of the same rate hospitals would receive,” Cooper says. “That wiped out the outpatient CT market over night. After that, we had the recession, health care reform and that brings us to today’s more stable market.”

“It’s a mature, saturated market with purchases only taking place when CT equipment needs to be replaced,” says Kovamees.

Although it is initially expensive to purchase a digital CT system, a November report by research firm Kalorama states that with continued use, operating costs are lower than with standard radiology. Film and processing are not required with digital systems, the annual cost of which can be as great as the capital cost of standard radiographic equipment. Once a digital system is installed, large film storage facilities are no longer needed.
1(current)
2
3
4
5
6
7