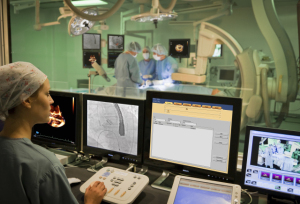 To build its hybrid operating room, Cooper University Hospital knocked down a wall.

The Camden, N.J.,-based facility removed a partition that separated two brand new ORs to create a single, approximately 1,000-square-foot space. The resulting hybrid room, which opened about a year ago, also consists of a fairly large supply room and a control room.

“You can access all of these rooms freely through motion-activated doors,” says Dr. Joseph Lombardi, head of the hospital’s division of vascular and endovascular surgery. “They slide open like in Star Trek.”

And that’s only the beginning of the OR’s futuristic feel. At the heart of any hybrid suite environment is a sophisticated imaging system that marries the capabilities of radiology with the sterility of surgery.

In the case of Lombardi’s OR, it’s the C-shaped Axiom Artis from Siemens Healthcare that enables physicians to precisely visualize small vessels, stents and catheters during cases.

Coupled with the traditional aspects of an OR, the imaging system allows surgeons to simultaneously perform open surgery and minimally invasive procedures in the same space.

But a hybrid room doesn’t come cheap – a hospital must be ready to shell out millions for the project. (Cooper University Hospital spent $3 million on its hybrid room.)

Still, industry research suggests that hospitals are tapping their piggybanks to embed high-end imaging systems into their ORs.

Why go hybrid?
Interest in hybrid rooms has notably grown in the last couple of years. Today, The Advisory Board Company, a consulting, research and technology services firm, regularly advises hospitals on the intricacies of hybrid OR projects. “We definitely get asked about this investment on a weekly basis,” says Ashley Ford, a research consultant with the company’s technology insights division.
And given the spike in interest among providers, it’s no surprise competition for hybrid OR customers is fierce. According to a recent report by Millennium Research Group, the hybrid OR market is projected to grow by about 15 percent per year through 2015.

Varying forms of hybrid room environments have been around since the 1990s and as a relatively new space, the term itself often ignites a debate about its definition.

“The simplest way for us to define a hybrid OR is an environment that enables both catheter-based interventional procedures and open surgical procedures to be performed in the same room,” says Greg McIff, director, cardiovascular strategic marketing, with GE Healthcare’s Surgery unit.
1(current)
2
3
4
5
6