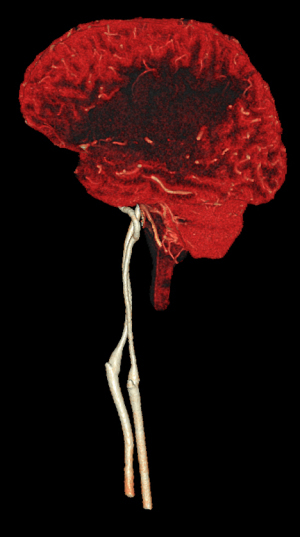 Medial cerebral artery (MCA) infarct
This week, organizations around the globe are working to create awareness and educate people about the signs, symptoms, treatment and prevention of one of the leading causes of death and disability--stroke. Wednesday, 29 October officially marked World Stroke Day.

According to the World Health Organization, every year 15 million people worldwide suffer a stroke. Five million die, and another five million are left permanently disabled. Globally, stroke is the second leading cause of death above the age of 60 years, and the fifth leading cause of death in people aged 15-59 years old. In many developed countries the incidence of stroke is declining even though the actual number of strokes is increasing because of the aging population. In the developing world, however, the incidence of stroke is increasing. In China, 1.3 million people have a stroke each year and 75% live with varying degrees of disability as a result of stroke. The predictions for the next two decades suggest a tripling in stroke mortality in Latin America, the Middle East, and sub-Saharan Africa.

The attached computed tomography (CT) image from Philips Healthcare illustrates one type of stroke, a large medial cerebral artery (MCA) infarct, which affects people around the world each year. The MCA is the largest cerebrovascular artery and is the most prone to cerebrovascular accidents. In this CT image, damage from the stroke can be seen on the left side of the patient's brain. Also attached is an example of a CT scan of a normal, non-stroke brain to provide a frame of reference and illustrate the affects of stroke on the brain.

One common type of stroke is the medial cerebral artery (MCA) infarct. Common symptoms experienced during an MCA stroke such as the one depicted in the CT image may be varied, and may include paralysis or weakening and reduced sensitivity on the right side of the patient's body, and loss of vision in the right visual field of both eyes. In addition, the patient's ability to speak would likely be impaired, as well as others understanding the patient's speech. The patient may have right-left confusion, a loss of the ability to distinguish the fingers on the hand, and a deficiency in the ability to write or comprehend mathematics. Lastly, changes in the sensation of touch, pain or temperature may occur.
Philips Healthcare provides a comprehensive clinical solution for stroke that includes the advanced imaging capabilities of the Brilliance line of computed tomography (CT) scanners - including the Brilliance iCT - and the Advanced Brain Perfusion application that permits rapid diagnosis and supports physiologically based treatment decisions via Philips' innovative Summary Maps that quickly identify potentially salvageable brain tissue.

For more information, go to:
http://www.stroke.org/site/PageNavigator/HOME