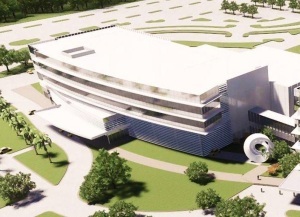 Powering its proton therapy services will be a two-gantry system, according to Dr. Kent Thielen, CEO of Mayo Clinic in Florida. “This facility will give us the ability to offer our patients the full spectrum of cancer treatment options, including chemotherapy, immunotherapy, CAR-T cell therapy, surgery, proton beam therapy, gamma knife radiosurgery and traditional radiotherapy,” he said in 2019 when plans for the facility were announced.

The building was originally planned to be a 140,000-square-foot project but has since grown in size. Mayo Clinic is investing $211 million for the integrated oncology facility support tower and advanced radiation equipment, including proton beam.

It also is putting up $22 million for parking and patient walkways, and is currently reviewing a construction permit for the almost $76.3 million foundation and shell of the building. Full construction documents are expected this fall.

The facility will be near the Mangurian Building, which houses hematology and oncology care, and the Oncology Infusion Center. Mayo previously introduced proton beam therapy at its Rochester, Minnesota campus in 2015; and in Phoenix in 2016.

In 2021, it invested $200 million into a 110,000-square-foot expansion of its proton therapy program in Rochester that will free up space for 900 more patients annually and create 117 new jobs. It will also include two new treatment rooms with in-room imaging and pencil beam scanning, and be constructed in a way that allows for further expansions. It is slated to open in 2025 as well.

The design for the Florida building is not yet complete.