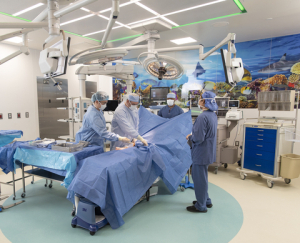 Part of Northwell Health, Cohen Children’s Medical runs the largest level 1 pediatric trauma center. Work on the 24,000-square-foot complex began in late 2021, and it contains eight child-friendly OR suites that will reduce waiting times for children, as well as adults at other ORs.

It is named after the Damaghi family, who have supported Northwell for more than two decades. “We understand that the surgical and anesthetic needs of neonates, infants, children and adolescents are absolutely unique and quite different than those for adults” said Dr. Charles Schleien, senior vice president and chair of pediatric services at Northwell Health, in a statement.

Each 600-square-foot operating suite has photo walls that hide the cold, sterile environment. No-shadow lighting and 3D imaging are present, as are four 50-inch monitors. Scary surgical instruments are hidden initially, and much of the equipment is suspended from one boom, reducing the amount of space needed and allowing for more versatility.

Patients can listen to music or watch videos prior to their procedures, and have several play areas. The complex is housed in the Blumenfeld Family Pavilion, which was built in 2013, and has a pediatric post-anesthesia care unit (PACU). This has 27 recovery bays that each have stretchers, a physiological monitoring tower, a waiting area for families and a supply cart for nurses. The PACU also has a medical playroom to calm children prior to surgery and when they are in recovery.

During COVID-19, the unfinished PACU was converted into units to care for patients with the disease. Funding for it was provided by the Louis and Gertrude Feil Family Charitable Trust, and it was named the Gertrude and Louis Feil Post-Anesthesia Care Unit in honor of the Feil family.

Funding for the complex was part of Northwell’s Outpacing the Impossible campaign, a $1 billion effort to advance healthcare and support Northwell’s care efforts. The ORs were funded by First Quality Enterprises, a manufacturer of healthcare products in Great Neck.

Surgicalists: A savvy solution to the growing surgeon shortage for the modern hospital