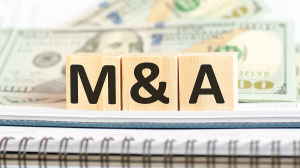 The number is the lowest of any Q1 period since 2016, according to Kaufman Hall’s Quarterly Mergers and Acquisitions Report. The lack of transactions coincides with low-level activity observed throughout the pandemic and resulted in smaller values.

No mega transactions, where the seller or smaller party’s revenue exceeded $1 billion, took place, and four of the 12 included companies whose average revenue was below $100 million. “We believe this was simply an anomaly; although we have seen fewer mergers during the pandemic, those that we have seen have been, on average, significantly larger than what we saw pre-pandemic,” Anu Singh, managing director and leader of the partnerships, mergers and acquisitions practice at Kaufman Hall, told HCB News.

Seven of the 12 involved for-profit sellers and only one had a for-profit buyer. National health plans increasingly took part in M&A activity and are increasingly becoming invested in the care delivery space, particularly for home healthcare. One such deal was an acquisition announced by UnitedHealthcare Group to acquire home-based health operator LHC Group.

The findings were similar to those of Q1 2021, according to Singh, with the operations and financial pressures of the ongoing COVID-19 surges primarily responsible. The year of 2021 saw significantly fewer mergers and acquisitions at just 49 in total. But eight of these were mega-mergers, which have become more common since the pandemic. The number of these large transactions was nearly double the percentage from 2020 (8.9%) and the highest in six years.

Hospitals were also more focused on core markets and assets, strengthening intellectual capital resources, and addressing societal issues and underserved populations. They are expected to continually invest along these lines in 2022, primarily due to the effects of the pandemic, which have made larger healthcare systems better positioned to resist the impact. Providers are also turning away from less attractive markets and seeking to offer new services to customers and enhance delivery of specialized care.

Singh expects healthcare systems to increasingly invest in mergers and acquisitions throughout the rest of the year. “Much will depend on the course of the pandemic. Organizations that have advanced their own transformation to emerging opportunities and challenges will benefit from resiliency to events like the pandemic, and we anticipate a return to more transaction activity as the year progresses.”