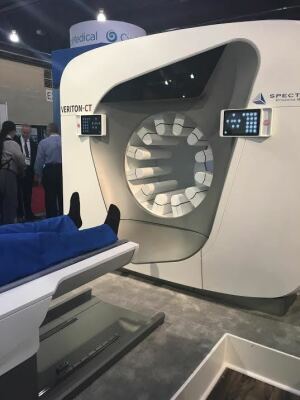 Spectrum Dynamics has received permission to proceed with a lawsuit it has filed against GE Healthcare for misappropriation of trade secrets regarding the development and commercialization of the VERITON SPECT/CT system
Spectrum Dynamics has gotten the green light for a jury trial to proceed in its case against GE Healthcare for alleged misappropriation of trade secrets.

The scanner facilitates broad-based transition from analog to digital within the SPECT imaging equipment market. This ability is expected to help hospitals and healthcare systems improve patient clinical outcomes and reduce their expenses.

“By stealing Spectrum Dynamics’ inventions, GE avoided years of its own R&D efforts and considerable expense in an effort to hasten the development of its own directly competing device,” Michael Joos, president and CEO of Spectrum Dynamics, said in a statement when the suit was first filed. “GE sought a shortcut to a technology that its own engineers were unable to develop. GE had no right to patent and produce technology it stole, and should be prevented from going to market with it.”

Spectrum Dynamics claims that GE filed patents related to the technology and design of VERITON prior to its development and launch in June 2018. It says that in doing so GE created unfair competition, and is seeking to correct the label of “inventorship” on GE’s patents, which it says claim Spectrum Dynamics’ inventions. It also is requesting monetary damages and both preliminary and permanent injunctive relief to prevent GE from continuing to develop, commercialize and use these trade secrets and ideas for any other purpose.

The lawsuit was filed in December 2018 in the U.S. District Court for the Southern District of New York. GE told HCB News at the time that it "observes and respects intellectual property rights, and denies these allegations."

GE has twice filed to dismiss the lawsuit and failed both times.

A Status Conference has been set in August to schedule a trial date.