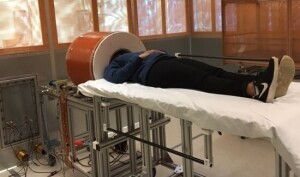 The compact and low-power system is designed to be mounted into ambulances, wheeled into patient rooms, or placed in small clinics or doctors' offices worldwide.

“In recent years, there has been a surge of interest in making MR more accessible. MR imaging is tremendously useful diagnostically, particularly for the brain, but logistical hurdles exist that preclude imaging anytime transport to a scanner is infeasible," Clarissa Zimmerman Cooley, an investigator in radiology at MGH’s Athinoula A. Martinos Center for Biomedical Imaging, told HCB News.

Cooley and her colleagues designed a portable prototype that can be plugged into an outlet and emit much less noise than traditional scanners. The intent was to create a more affordable scanner that could be used on patients too difficult to transport to a scanner room.

The scanner’s main magnetic field is ~19x lower than that of a 1.5 MR scanner, leading to lower resolution imaging. This makes it not a replacement or competitor of high-field scanners but instead a more accessible MR option for detecting brain abnormalities visible at lower fields.

Comprising it is a magnet the size of a laundry basket. The total weight of the scanner is 500 pounds (with custom lightweight designs, this can be reduced to approximately 350 pounds), and the cart can be pushed by a single person for transport.

Tested on three healthy adult volunteers, the scanner produced 3D Brain images, typically within 10 minutes, according to Cooley. “For true portable imaging, we are integrating EMI detectors into our scanner for EMI mitigation. This will greatly increase the image quality when our scanner is operated at the point-of-care.

Cooley and her team hope their research prototype will help pave the way to a user-friendly version in which users can simply choose an imaging protocol and click a button to start a scan.

The research was published as part of a study in Nature Biomedical Engineering.