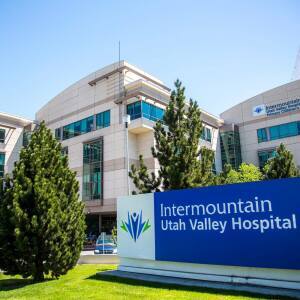 These conspiracy theorists have no need for medical care and have tried to gain entry a number of times to videotape physical proof of their claims, the hospital told the Provo Municipal Council last week. It also claims to have been inundated with calls from the general public about the accuracy of information divulged about hospital and ICU capacity, according to the Daily Herald.

“Although these situations are few and isolated, stopping attempts to gain inappropriate access and responding to fake conspiracy theories diverts attention from providing lifesaving care provided at the hospitals,” said Jess Gomez, spokesperson for Intermountain Healthcare, in a statement.

Some have gone as far as lying about coming into the hospital for an appointment, which has caused changes in some procedures. Others argue that seeing an empty waiting room or other vacant area of the hospital proves information about COVID-19 transmissions is false, reports the Herald.

Intermountain Utah Valley Hospital administrator Kyle Hansen says the hospital has identified instances on social media where people claim to have gained access, despite not having video evidence of actually being in the hospital. One such incident, he says, included a person videotaping themselves saying that it was all a lie and that the hospital was not busy at all.

“The ones that we are aware of, there are probably less than five,” said Hansen. “We’ve become aware of some through social media channels that we weren’t aware of, we’ve become aware of some because we intervene and prevent some of these individuals from gaining access. I don’t want to paint too broad of a picture that people are beating down the doors at every entrance, but it’s certainly something we have noticed here more recently as a trend, in terms of certain individuals trying to gain access to the hospital that should not.”

In addition, it has also received calls questioning the accuracy of the information it has put forth about hospital capacity, cases of COVID-19 and possible crisis care. The hospital according to Hansen is much busier than usual at this time of year due to the pandemic, with the ICU always full to the point where ICU patients are being cared for on additional floors of the facility. Should any beds be open it means that the staff needed to care for patients are not available and the beds therefore cannot be filled.

Provo police told ABC4 Utah that there have been eight calls for trespassing to the hospital since May, with three taking place in the past two months. While they were unable to confirm how many included reports of people filming inside hospitals, they did say that those caught may face a misdemeanor.

GE to spin off GE Healthcare in early 2023