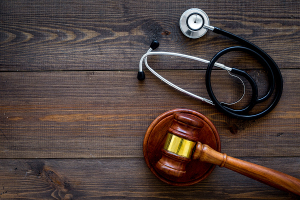 The settlement, which is not yet complete, would put an end to an investigation by the Department of Justice into whether or not the Utah-based medical device company made illegal kickbacks to physicians in exchange for using their products over those made by competitors. Merit says the settlement is not an admission of guilt and denies any wrongdoing.

“Given the mounting costs and time demands associated with the investigation, we believe this resolution is in the best interests of the business,” said Fred Lampropoulos, Merit’s chairman and chief executive officer, in a statement. “Merit will continue to focus on our core mission: to be the most customer-focused company in healthcare.”

The suit against it was made public last month after the United States filed its notice of intervention and the court unsealed the case. The whistleblower was Dr. Charles Wolf, a non-practicing medical doctor and an accredited healthcare compliance professional who served as Merit’s chief compliance officer.

He alleges that the company made illegal kickbacks to induce physicians to use its Embosphere and QuadraSphere microspheres for embolization and occlusion — with some kickbacks in the form of all-expense-paid trips to places such as Paris, Ireland and Hawaii. Others included paid advertising for loyal users and consulting fees to influence physicians, with the company disguising its activities as educational in nature. He also accused Merit of engaging in off-labeling uses for its Embosphere and QuadraSphere solutions, as well as its Endotek gastroenterology stents and CO2 kits; and of running up expenditures for Medicare, Medicaid and other public healthcare players.

Wolf brought his concerns to the company’s management, which he says in his complaint discussed compliance and created a numeric system to assess the risk of certain proposals. It included a “chili pepper” scale from 1-3 regarding how much “heartburn” a particular action would give the company regarding compliance and ethics.

When nothing was done to address the issue, he resigned and reported his concerns to the Department of Justice. The DOJ launched a thorough investigation before deciding to intervene.

The False Claims Act prevents individuals and companies from defrauding the government, and allows individuals with information on false claims or overcharges to come forward. Federal and state laws prohibit any kind of payments, including for marketing purposes and consulting, from being used to influence which medical devices physicians choose to use.

The settlement is currently being papered and is expected to be complete within 60 days.

Merit Medical said it had “no further comment until the definitive agreement is completed.”