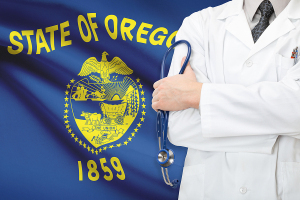 The model, which reimburses providers with a fixed monthly fee per patient rather than traditional per-visit reimbursements, has decreased services by 42.4%. The result, according to researchers, is that patients are spared the costs and burdens of low-value imaging without changing how much a provider receives in reimbursements.

“This particular alternative payment model (APM) does not have downside risk,” Stephan Lindner, research assistant professor at Oregon Health & Science University Center for Health System Effectiveness (CHSE), told HCB News. “Providers don't get paid less compared to the per-visit reimbursement model. To ensure that, the state has a payment reconciliation process in place. So my view would be that this APM is financially viable for providers.”

Lindner and his colleagues evaluated the change imposed by Oregon’s Medicaid program in 2013, which switched its reimbursement for selected community health centers from the traditional per-visit to a per-patient fixed rate. They did this by examining Medicaid claims and enrollment data of 150,000 Oregonians between January 2010 and June 2017, and compared community health centers that participated in the new model to those using the traditional one.

Those that used the alternative reimbursement payment model were also found to make greater use of traditionally non-billable care, such as e-visits and telephone visits, in a companion study.

Lindner says the reduction in services frees up resources for the provider and enables it to interact in different ways with patients, such as by phone or through basic health screenings. He adds that a potential next step in further validating the efficiency of this model is to examine the specific imaging modalities that are reduced in utilization under it.

“We did not specifically look at types of imaging in this study,” he said. “That would be a good follow-up study but was beyond the scope of our research. I think this APM has attractive features for FQHCs, but participation is voluntary, and each state decides whether they want to offer an APM to their FQHCs or not, and what that APM looks like.”

The findings were published in Health Affairs.