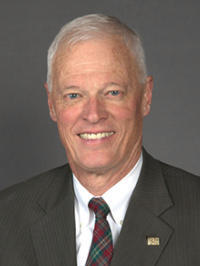 James P. Borgstede
CHICAGO — James P. Borgstede, M.D., was named president of the Radiological Society of North America (RSNA) Board of Directors today at the Society's annual meeting in Chicago.

As president of the RSNA board, Dr. Borgstede will support RSNA's commitment to promoting innovative educational opportunities and the advancement of radiologic technologies.

"The RSNA is a worldwide leader in radiology clinical practice innovation, research and education," Dr. Borgstede said. "We are members of a specialty with amazing and unparalleled opportunities for scientific advancement. As an RSNA leader, my goals include advancing the appropriate development and use of radiologic technologies, particularly in relation to artificial intelligence, and assisting with education and radiology development in under-resourced areas of the world. I am honored to have the opportunity to serve our patients, our specialty and the RSNA."

Over the years, Dr. Borgstede has been very involved with the RSNA annual meeting. Recognized in 2019 as an Honored Educator, he has delivered scientific presentations and refresher courses, participated in symposiums, and was co-presenter in 2005 of a special focus session, "The Diffusion of Imaging and Peril of Inappropriate Utilization." At RSNA 2007, Dr. Borgstede lectured during the Opening Plenary Session. He has had dozens of articles published and has lectured at more than 120 scientific and educational meetings worldwide.

Vanderbilt University Hospital to kick off $500 million expansion this summer