Thanks a lot to all that helped organize these tours (see picture below). 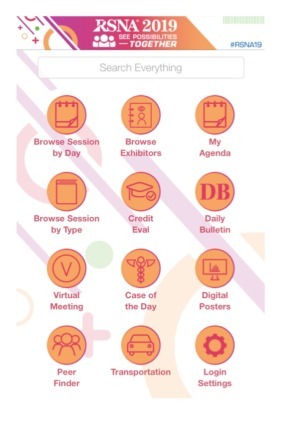 It is now possible to attend — the scientific presentations — as Virtual Meeting Participant (maybe also a reason for the lower number of visitors), and the RSNA developed a rather useful smartphone app.

Internet connectivity was excellent ... I had several video conferences without any technical issues sharing the bandwidth with several thousands.

UBER / LYFT is really successful and many attendees pick these means of transportation rather than bus or train. This causes massive traffic jams and delays at the boarding areas and was also a reason that many left before official closing hours to avoid getting stuck — take the METRA ... best public transportation to downtown in my opinion.

Business models still a little unclear to me, but if they provide clear workflow (e.g. SMART REPORTING) advantages or make imaging easier, better and more powerful (e.g. KOIOS, CONTEXTFLOW, IBM) then they will find the way to the customers purse.

Many other interesting concept ideas — even without AI — EOS showed a standing X-ray with two simultaneous image acquisitions and a very intuitive way to determine exposure area. The images that I saw were quite nice. Killer application: do not know.

Our friends from FRAUNHOFER showed a MR guided transcranial ultrasound stimulation device that is able to temporarily break the blood brain barrier to allow medication to enter. Interesting idea with quite some technological challenges apparently solved now.

HITACHI showed an oval bore MRI ... maybe the easier way to create more space considering the gravitational forces that the human body is exposed to 😉 .
1
2
3
4(current)
5
6

Communication breakdowns are taking a huge toll on doctors, patients and our healthcare system

Want to improve patient relationships? Let them express their preferences

How the DOTmed staff is dealing with the coronavirus