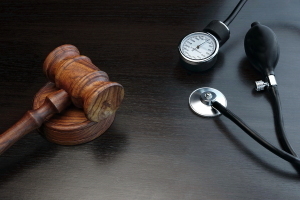 An Ohio provider of portable radiology services will be making a stop soon at court after being indicted on 25 counts of healthcare fraud and one of making a false statement.

Thomas G. O’Lear, the president of Portable Radiology Services (PRS), is facing the charges after allegedly billing Medicaid and Medicare for services to nursing care and other facilities that were never provided, and for which he received nearly $2 million, according to Ohio's Channel 19 News in Cleveland.

The allegations include that the firm billed for over 150 instances of X-rays on patients after the dates when they had died, from 2013 to 2017, according to a statement by the U.S. Attorney's Office of the Northern District of Ohio of the U.S. Department of Justice.

To cover his tracks, investigators allege that O’Lear forged signatures of medical professionals to make it look like the exams had been ordered.

Prosecutors include Assistant U.S. Attorneys Brendan D. O’Shea and Mark S. Bennett, after the initial investigation was conducted by the U.S. Department of Health and Human Services — Office of the Inspector General, the FBI, and Special Assistant U.S. Attorney Jonathan L. Metzler and Special Agent Jeremy Buening of the Medicaid Fraud Control Unit of the Ohio Attorney General’s Office.

“Today, one of the largest healthcare fraud schemes in U.S. history came to an end thanks to close collaboration and coordination between the FBI and partners including HHS-OIG [U.S. Department of Health and Human Services Office of the Inspector General] and IRS-CI [IRS Criminal Investigation],” said FBI Assistant Director Robert Johnson in a statement at the time.

The investigation, called Operation Brace Yourself, led to charges against CEOs, COOs and others involved in five telemedicine companies, owners of dozens of durable medical equipment (DME) companies and three licensed medical professionals, according to DOJ.

“The defendants took advantage of unwitting patients who were simply trying to get relief from their health concerns,” said U.S. attorney Craig Carpenito, explaining, “instead, the defendants preyed upon their weakened state and pushed millions of dollars’ worth of unnecessary medical devices, which Medicare paid for.”

The charges stemmed from “an alleged scheme involving the payment of illegal kickbacks and bribes by DME companies in exchange for the referral of Medicare beneficiaries by medical professionals working with fraudulent telemedicine companies for back, shoulder, wrist and knee braces that are medically unnecessary,” stated the department.

Doctors were allegedly bribed to prescribe DME “with only a brief telephonic conversation with patients they had never met or seen.”