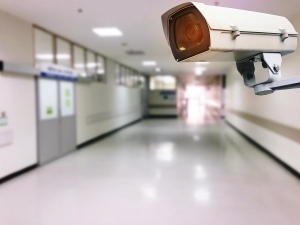 From the April 2019 issue of HealthCare Business News magazine

A noticeable change is occurring at the front entrance to hospitals.

Currently, many facilities allow incoming visitors, contractors and others to enter hospitals from multiple access points – adjoining medical office buildings, side doors, delivery doors, as well as the front door, without questioning or stopping anyone. Visitors still stop at information desks inquiring about patient locations but many people just pass by without mention of their destination or purpose. This security gap is closing at more and more hospitals due to multiple reasons, including infection control.

Some facilities have moved to increase security due to local and even internal incidents. Two Florida hospitals took aggressive security stands after the Pulse nightclub shooting incident in Orlando. Both the Arnold Palmer Hospital for Children and the Winnie Palmer Hospital limited the number of facility entry points and added metal detectors as part of the screening process. Another Florida hospital quickly installed new security procedures after a patient killed a doctor.

Security officers are now armed at many facilities and some hospital systems are augmenting safety by training staff members on how to de-escalate potentially violent situations. A nurse was assaulted in a supply room by a patient facing criminal charges; a security guard and another nurse coming to her aid were also injured. According to police reports, Richmond Virginia hospitals reported over 200 thefts from patients in area hospitals over a two year period. Health systems are hitting a tipping point of security enhancement needs to protect patients as well as clinical staff.

Employees at one northeastern hospital signed a petition demanding security upgrades after a worker was mugged in a parking lot. The local police department was asked to review the facility and reported too many open entrances to the facility. The hospital responded and is now spending on the security upgrades to make the facility safer for staff, patients and visitors.

Some rural hospitals state that changes are necessary, since police response can be longer than 10 minutes in some areas. Children’s Hospitals normally have the best security because their patients are mostly defenseless. Entry at children’s healthcare facilities has narrowed to a limited number of doors where a waiting security officer will direct visitors to the official check-in station. Large hospitals with multiple access points have narrowed entry points by making them only badge-accessible for approved staff. However, some hospitals still have a relatively open-door policy that allows an outsider to travel freely in the facility and merely count on signage and an occasional volunteer to question their purpose.
1(current)
2