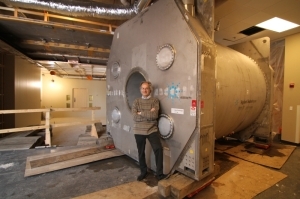 Kamil Ugurbil, director of the University
of Minnesota CMRR, stands beside the
10.5 Tesla MR from Siemens Healthineers.
From the September 2018 issue of HealthCare Business News magazine

In February, after many years of planning, the Siemens Healthineers 10.5 Tesla MR at the University of Minnesota’s Center for Magnetic Resonance Research performed a first-ever 10.5 Tesla full scan of the human body.

The hope is that this machine, with its 110-ton magnet, will provide fresh insight into brain function as well as a range of illnesses, such as heart disease, diabetes, and cancer.

HealthCare Business News contacted the team at UMN and asked them a few questions about the project. The responses, which were provided by email, come from Kâmil Uğurbil, director of the CMRR, and associate professors Greg Metzger and Gregor Adriany.

HCB News: How did UMN come to acquire a 10.5 Tesla MR system?

The 10.5 Tesla project at the Center for Magnetic Resonance Research (CMRR) was funded by an $8 million High End Instrumentation grant from the NIH, with additional support from the University of Minnesota toward acquisition of the magnet and construction of the space for the system.

The grant aimed to push the boundaries of MR technology further by establishing a 10.5 Tesla MR imaging and spectroscopy instrument with a sufficiently large bore size (83 cm clear bore) to perform studies on the human body. This instrument was to be first of its kind in the world and the highest field available for research in the human brain as well as the human torso and extremities.

HCB News: What are the shielding specifications like for a magnet that strong? Did the very high strength require special considerations?

There are two ways to reduce the fringe field associated with such an ultrahigh-field magnet to acceptable levels (~5 gauss), either use a large magnet to counteract the magnetic field (actively shielded magnet) or surround the magnet with a massive iron housing (passively shielded magnet). For the CMRR’s 10.5 T the only option was to use a passive shield using 600 tons of iron.

Building an active shield would have made the magnet too large and heavy as it is integrated into the same cryostat (super cooled part of the magnet) as the windings used to generate the desired 10.5 T used for imaging.

The iron shielding reduces the magnetic field from inside the magnet of 10.5 T to ~5 gauss at the perimeter (~7 m from the enclosure). In the absence of the passive shield, the 5 gauss line would have been much further away; much too far to site at the CMRR considering the other equipment in the facility (other high-field systems, a levitation magnet, optical imaging labs, cyclotron. etc.).
1(current)
2
3
4
5