He gave another example – something as simple as a sterilizer going to a dental clinic. “If you assumed that a clinic has a central steam supply and it doesn’t, and you’ve ordered a sterilizer that doesn’t have a boiler, you’re going to be stuck until you get a boiler for it,” Reid said.

There were some growing pains during the overhaul of the department. For one, leadership was chasing a metric of work order completion and as long as the backlog was kept under control, the situation was accepted. However, with about half of the equipment over-aged, the work orders were piling up. The situation was untenable, but solutions were found. “My boss, Deanna Hughes, who was also a biomed, she and I came up with a strategic plan to replace nearly 70 million dollars’ worth of equipment in the hospital.”

Although it was a hefty price tag, in the long run the cost was offset by reducing repair costs and downtime. It did create more work in the beginning, as systems were installed and technicians and operators received training on the new systems. Which led to another observation by Reid, “Going forward, I think we would look into contracts for temporary technicians for a year or so to keep on top of the work log if we were bringing in that much new equipment.”

And the result? A more efficient maintenance process, better-trained technicians, new equipment and a reduction in the maintenance budget of more than five million dollars per year. 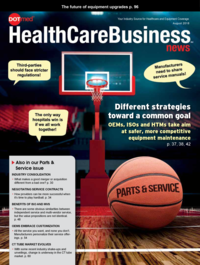