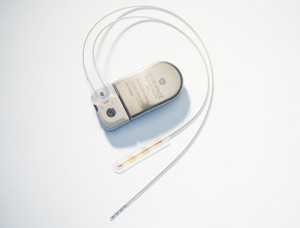 The brain implant, developed by NeuroPace, works by transmitting electrical impulses to areas of the brain that are causing the seizures, which occur when neurons in the brain fire abnormally.

The device is one of several treatments — others include MRI-guided lasers and high-intensity focused ultrasound — aimed at offering alternatives to drug therapy.

In the U.S. alone, three million people a year suffer from epilepsy, and while drug therapy works for most, a significant portion of patients don't respond as well to it.

"If you think about the need for new treatments in the field, it's immense — there are millions of people diagnosed with epilepsy, a third don't have good seizure control," said Frank Fischer, CEO of NeuroPace.

Unlike lasers or focused ultrasound, however, NeuroPace's device doesn't ablate tissue. "There's essentially no opportunity for any potential side effects with removal of tissue as a result of our therapy," said Fischer.

The entrance of devices like this one indicate a larger industry trend in which manufacturers are developing more and more devices that offer an alternative to drugs.

Most notably, Ardian Inc., one of the earliest companies to pioneer this space, developed a device that controlled hypertension by severing the renal nerve through radiofrequency energy. Other companies have quickly followed suit in recent years.

"Pharmaceuticals will take care of a significant portion of the clinical need, but there will be some unmet clinical needs that provide opportunities for medical device development," said Fischer.