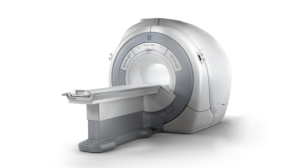 The Brivo MR355 (Credit; GE)
GE Healthcare announced Monday that it has installed worldwide 500 of two of its newest MRI scanners.

The Waukesha, Wis.-based health division of the industrial conglomerate said the two systems, the Optima MR360 and the Brivo MR355, were two of the fastest-selling MRIs in the company's history.

The 1.5-Tesla systems were jointly launched globally in 2010, and GE announced their U.S. Food and Drug Administration clearance in March last year.

The OptimaMR360 is supposed to run on 34 percent less power than earlier generation systems, with GE saying it could potentially save hospitals around 60,000 kilowatt hours per year, according to a March 2011 press release. The Brivo MR355 is supposed to be easy to use, with a "Ready Interface" that lets technologists input scan parameters in fewer steps, according to GE.