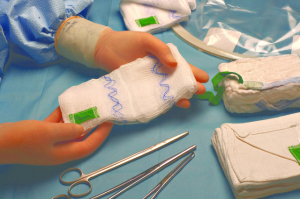 One day, during his shift managing a PETCO store in Orlando, Fla., Lenny LeClair had stomach pain. After suffering a few agonizing days with the hope it would go away, he finally went to the hospital. Doctors diagnosed diverticulitis, a digestive disease that normally requires part of the colon to be removed. After his final surgery to reconnect damaged tissue, LeClair went home to recover. But three months later, things got even worse.

“All of a sudden I started throwing up from sun up to sun down, even throwing up feces,” he says. This went on for a while until LeClair lost consciousness. When he woke up in the hospital after being in a coma for three weeks and having an emergency surgery performed, he was told that sponges had been left inside him after his surgery months ago.

“What it had done was pierced my colon so all those toxic fluids were going right into my body,” says LeClair.

He brought home less than six hundred thousand dollars when the hospital settled with him. Since he’s too sick to work, he says he’s lived off most of that settlement money and shelled out a majority of it for expensive medications.

“I get emotional when I talk about it. I think my life has gone down the tubes and I was a successful man,” says LeClair.

Thousands of adverse medical events that happen each year in the U.S., like LeClair’s, are the result of items left in a patient’s body after surgery. These objects can range from clamps and forceps to scissors. But gauze-like sponges used during an operation account for about two thirds of all retained items.

The landmark 1999 Institute of Medicine report, “To Err is Human: Building a Safer Health System,” which found that U.S. hospitals kill at least 44,000 patients a year, compelled the medical establishment to improve patient safety. But statistics remain dismal to this day.

Small steps for big changes
U.S. surgeons operate on the wrong body part as often as 40 times a week, and roughly a quarter of all hospitalized patients will be harmed by a medical error of some kind, according to a recent Wall Street Journal article by Dr. Marty Makary, a surgeon at Johns Hopkins Hospital and a developer of surgical checklists.

“These mistakes go largely unnoticed by the world at large, and the medical community rarely learns from them. The same preventable mistakes are made over and over again,” he writes.

Many hospitals have taken it upon themselves to put a stop to preventable medical mistakes. And many are simple fixes.
1(current)
2
3
4