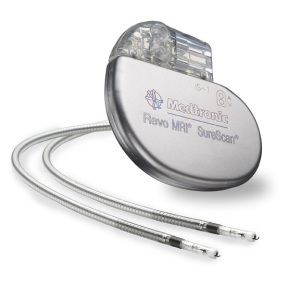 The Revo MRI
pacemaker, shown here,
is available in the U.S.
(Credit: Medtronic)
Medtronic Inc. said Thursday Japan's regulatory authorities approved for sale its pacemaker that can be used around MRI scanners.

The device, the Advisa DR MRI SureScan, is the first so-called "MRI-conditional" pacemaker cleared for sale in the island country, the Minneapolis-based medical device giant said in a press release.

Patients with other sorts of pacemakers are often prevented from getting MRI scans for fear the machine's powerful magnetic fields could interfere with the devices.

Advisa was released in Europe in 2008. It doesn't have U.S. Food and Drug Administration approval yet, though the agency gave Medtronic the OK last summer to run safety trials on it, which are expected to wrap up in May, the company said. Another Medtronic MRI-conditional pacemaker, the Revo MRI, received FDA approval in February last year.

Japan is the world's second biggest market for medical devices, and nearly half a million people have implanted pacemakers there, Medtronic said. Half to three-quarters of patients with implanted heart devices will need an MRI scan during their lives, the company said, citing a 2006 study in PACE.